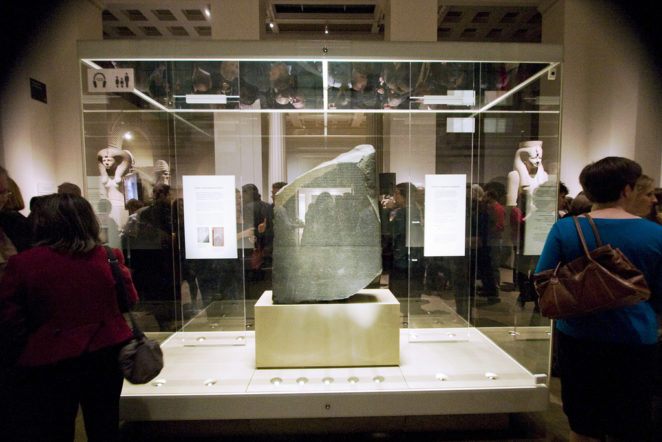 Checking if the Rosetta Stone is still there. ;)

The Rosetta Stone is a stone slab (or “stele”) that is of immense importance to Egyptology. Consisting of a form of granite known as granodiorite, it measures 45 inches (114 cm) in height and weighs about 1,700 pounds (769 kg), although it is not complete and it is easy to see where parts of it have broken away. It dates from 196 BC but was only discovered in 1799 during Napoleon’s occupation of the Nile Delta, at the town of Rosetta (Rashid).

Its value as an object comes from the inscription on it, which the viewer can easily see is in three distinct sections. These represent the same text (a decree issued on behalf of Ptolemy V) but in three languages, namely Ancient Greek, Egyptian Hieroglyphics and Demotic (a script used in Egypt after hieroglyphics fell out of general use). Despite the fact that the amount of hieroglyphic text is relatively small in comparison with the other scripts, it was enough to provide the key to a lost language.

As it happens, the Rosetta Stone is not the only example of a trilingual or bilingual ancient text, but it is certainly the best known. Like the Elgin Marbles, it has been the subject of conflicting claims as to where it truly belongs, but it has been a central feature of the British Museum’s collection since 1802 and is now displayed in Room 4 (Egyptian sculpture), which runs alongside the Great Court at the centre of the building.

Also in this room is the massive statue of Ramesses II which weighs more than seven tons and was carved from a single piece of granite in about 1250 BC.