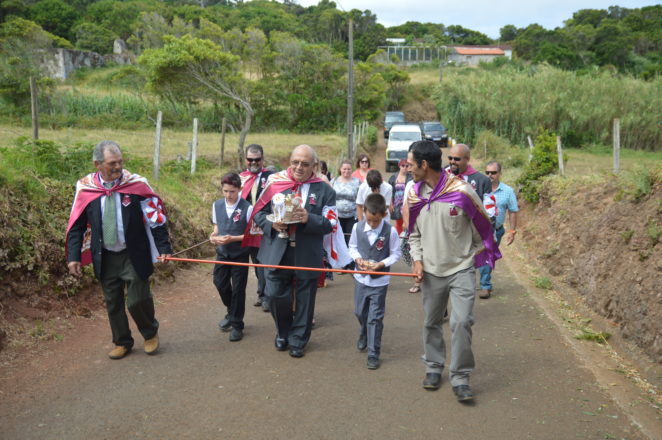 The Cult of the Divine Holy Spirit was brought in the 15th Century to Santa Maria, in Azores by the influence of the Franciscan Order.

True to its roots, Santa Maria celebrates the “Impérios” and maintains this popular tradition that goes back to the beginning of the settlement. They are moments of fraternization and community sharing without distinction of classes. The role of the Divine Holy Spirit is to practice charity, in one of its fundamental manifestations, the almsgiving and the search for divine help in moments of distress, always resulting from personal or family promises. Formerly this manifestation of faith was confined to the celebration of only three “Impérios”. Nowadays, these festivals have adapted to the new needs of their devotees, extending in summer, when the island receives many of its emigrants who continue to have a very close relation with their origins, as well as others who visit us and want to know and witness the singularity of this typical “Mariense” feast.

It is a ritualistic tradition with a strong symbolism in which each participant has a specific and defined role. The “emperor and empress” (imperador and imperatriz) are the ones responsible for the promise made, and assume the main role of the whole ceremony.

An “Império” raises a serious financial commitment guaranteed by the emperor. (imperador) However, thanks to the spirit of sharing, intrinsic to the cult of the Divine Holy Spirit, several people collaborate in its organization, through donations, either financially or providing specific food products such as bread, meat, threads, amongst others . The silver crown bearing on top a dove, and the sceptre, represent the main insignias of the “Império”. Of the rituals that involve all the festivity, religious processions are very important, emphasizing the one where the “Império” moves from the emperor’s house to the religious eating spot (copeira), involving a colourful procession filled with joy by all participants.

It’s a ceremony that counts with the presence of the “Foliões” who, in groups of three, improvise songs and “falsettos” accompanied by the beat of a drum and other typical instruments in a very peculiar sonority that continues throughout the rest of the event. The “copeira”(eating spot), the theatre (or triad) and the Hermitage are the main structures built for carrying out this important event of the “Império”. The “Copeira” is the place where soups, meat and wine are offered, the “theatre” (or triad), similar to a porch, where the table bread is distributed, and the hermitage is where the religious rituals related to the empire take place . During the day the traditional soups are distributed in the “Copeira” that were prepared by cooks and their helpers. The “hustle and bustle”  in the cooking of the meat begins at early dawn. In Santa Maria there are several “Copeiras. These traditional ceremonies, long awaited all year round, are announced as one of the most genuine events on the island of Santa Maria. In the “Impérios” of the Holy Spirit the generous soul of the “Marienses” is evident and this characterizes well these folks.