Two years spent in Paris, represented by Nadezda Petrovic period special inspiration. Painter should vistas were further extended through direct contact with works of Impressionism, Fauvism, Cubism, Futurism, which was surrounded. Paris cultural scene represented by Nadezhda ground where she could feel free to experiment and to fully devote development of modernist idea that the academic public in Serbia is still not understood. Artistic maturity shows in images of the Gothic cathedral of Notre Dame, the Seine bridges, landscapes Bois de Boulogne and the coast of Brittany. Although the city’s neighborhoods and nature inspired France, Nadezhda’s attachment to their homeland expressed through special painting themes. During his stay in the studio of sculptor Ivana Mestrovic painted a cycle of patriotic works like Marko Kraljevic and Kosovke girls. The memory brought from Paris – black hat with a big bow – completes the portrait of a sixteen Ksenija Atanasijević by Nadezhda pictures in winter 1912, shortly after returning to Serbia. This small work magnificently by the message it carries. Figure stands as amaturity of women’s emancipation uniting two separate entities: the author Nadezda Petrovic – originators of the modern Serbian art and model Ksenia Atanasijević – the first woman doctor of science in Serbia, which is at the University of Belgrade studied philosophy. 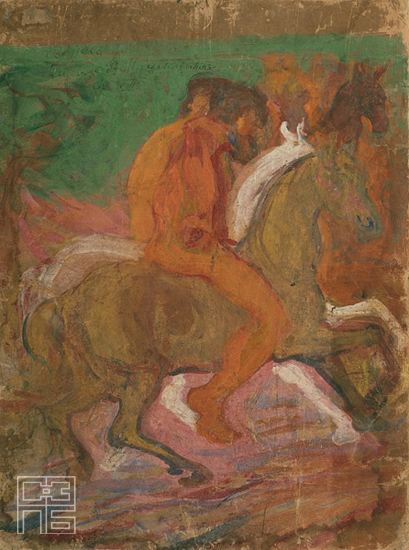