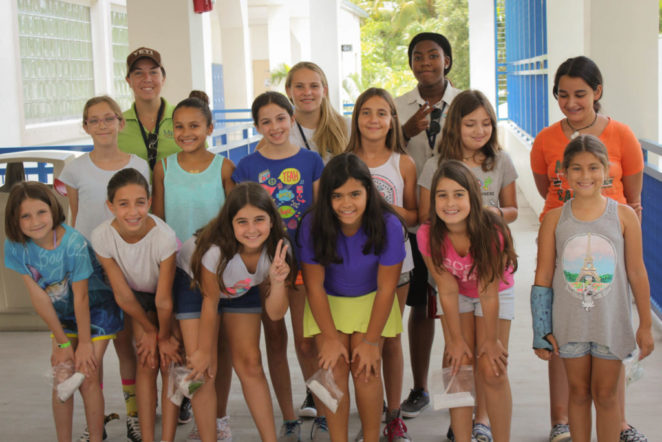 When I was a little kid, I played sports very well.   But in my day, girls didn’t.  Girls wore white dresses and played with dolls.

Because I was so good, I cut my hair short, wore boy’s clothes and said my name was Peter.  I played on the boy’s team.   I was that good.

At school, my class, 6-1,  was going to play a ‘punch ball’ competition with the other Sixth Grade classes, and the winner would play another school.

Punch ball is a kind of base ball, but the ‘batter’ is the ‘puncher’ and the puncher has the ball, and punches the ball, and runs.   There are the four bases, just like base ball.

I was very good at this game.   One of the best in my neighbourhood.   I played with the boys, and played better than many of them.

The teacher said to a girl named Barbara; “You pick the team.”

Now Barbara was not a sports girl, she was one of the girls who giggled and wore white dresses, and played with dolls.   She picked her friends.

I’ll never forget the big smile on her face when she said; “Bernice!”  and Bernice scurried to her side.  “Lynn!”  and Lynn giggled and came to her.

In short, I was not a friend of Barbara so I was not picked for the team.

As one of the ‘rejects’  I was to go way down to the back of the field, and play with them.   I couldn’t understand it.  It was the most unbelievable moment of my little life.

I was so good, the boys put me on their team, yet, I was not picked for my class.

I walked slowly, because I was so confused.

At the back of the field the girls had assembled with the Student Teacher, and were organising, and I didn’t reach until after the teams had been picked.

Someone mentioned I’d been left off, and I said, “This okay, I don’t know how to play.”

And I sat down.

Maybe some of the girls knew I was lying, maybe the Student Teacher did, but the way I acted and spoke, no one said anything.

I sat, then slipped away and went home.

When the competition started, I rooted for 6-2.   The kids in 6-1 called me traitor and even the teachers were annoyed.

But I didn’t care.     I didn’t care even after I got the whole lecture on ‘class unity’, ‘loyalty’, and the rest of the mental enslavement manifesto.