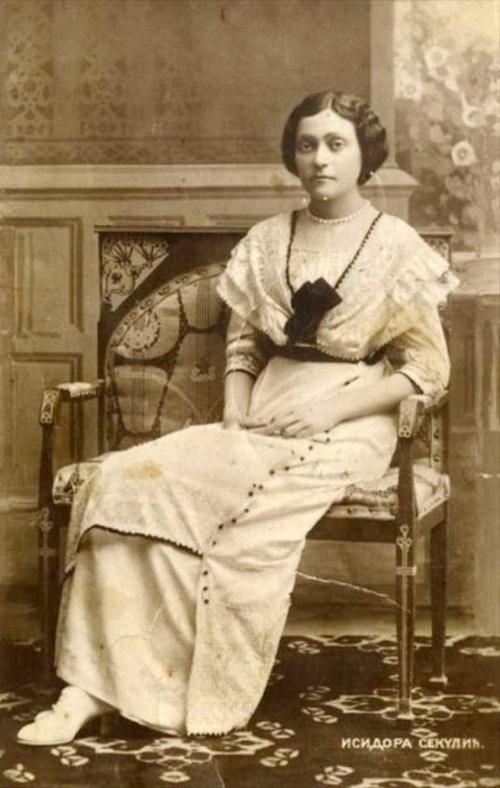 Born in 1877, died in 1958. She worked in schools and high schools until he asked to retire and spent most of his life in the Your Palagića 70 on Topcider hill, in whose cemetery and buried. In Backa was born, but the province has never seen as “their”. She was a lady of Belgrade. The first woman in the SASA, the first Serbian woman (1913) visited Norway.

Her best known works are the Letters from Norway, Chronicle provincial cemeteries …. Isidora was married, albeit brief and unhappy because her husband died young of tuberculosis. Just this disease was the fate that followed her throughout life, taking at her previous entire family and leaving her alone to struggle with poor health and constant migraines. Probably this is what has influenced and shaped her personality is making is so solitary, closed and stable. About Isidora many have something to say – one is remembered as a friend, as a neighbor, a colleague and as a contributor writer, some as enemies.

However, it is nice that they all have to say almost the same about her. That was stoic, that was somewhat cold, but extremely turbulent feelings towards science, literature and knowledge that is rare with anyone was close, but she had to find the perfect manners, which showed by every (except journalists) superbly hosted. Visits received almost always Thursdays at its specific status, which looks a little like a pharmacy, a bourgeois decoration and was scarce, but at the same time full of books (always open) and the beautiful, lush garden and a picture Njegoša, Mozart and Chopin to greets visitors at the entrance.

Even those who did not like it do not criticize and do not criticize, because you can not say that was not correct. As she herself stated, no one was responsible for life; repaid even his own funeral. From an early age she was the one with the nose in a book whose father was reading Latin instead of bedtime story. Led the long monologues (but never without a point!) And work heals all diseases .. Even though his had, as a family concept, appreciated above all.

The great paradox is that it can be viewed as a great feminist figure, a woman who has traveled, worked and moved many borders, while at the same time, argued that the woman an important place in the house that feminism does not make sense and that every woman should be or cook or maid (wherein the siding themselves in the second group).