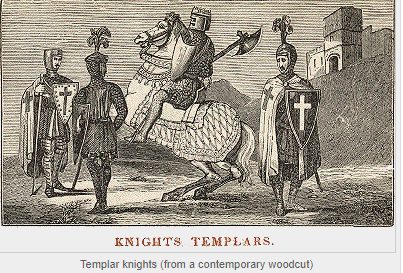 This section will attempt to explain the myth behind the fantasy stories of the Knights Templar. Following the fall of St-John of Acre on the 28th of May 1291, the Knights were forced out of the Holy Land. But long before they left, according to legend, the “Templiers” at their humble beginnings only counted 9 Knights. The King of Jerusalem, then, Beaudoin 11 gave them the right to establish their lodging in a building near the Temple of Salomon. The first Templars undertook excavations in the cellars of the Temple foundations. It also seems that those excavations proved fruitful. The 9 Templars have discovered something of particular importance that is likely to upset and even revolutionize the West and the future East/West relations. They apparently discovered the Ark of the Covenant and some relics and manuscripts that contain secret traditions of Judaism and ancient Egypt, some dating back to Moses and Solomon. But the latter, reputed for his legendary wisdom, certainly had not deposited the true Ark in the Holy of Holies of his Temple with all the risks that it involved. During the Troyes Council in 1129, it is explicitly revealed that a first mission has been fulfilled by the Templars. But was that concerning the excavations or the crusades?  It is not specified.

So it was only from 1118 that the Templars recruited new brothers and organized themselves into a veritable army that traveled the Middle East while raging battles and/protecting pilgrims. In order to properly assume their mission (armament, building of forts and commanderies…), the Templars need a lot of money. Nobles and clergy alike give them that money in the form of donations. For two centuries, the Order of the Temple will grow, recruit many new members and settle itself in the Middle East and Europe for a long time. The  Templars are also at the origin of a very modern concept: banking. Kings, princes and barons will entrust them with their money and ask them for loans to finance new constructions and war expenses.

However, following the fall of St-John of Acre, the Templars withdrew to Cyprus and returned to France to occupy their commanderies. The Templars possessed immense wealth, augmented by the work of their commanderies but above all a military power equivalent to 15,000 men, including 1,500 Knights trained in combat which was a force totally devoted to the Pope. Therefore, such a force would only prove itself troublesome to the power in place and the presence of the Temple as a papal jurisdiction greatly limited the power of the French King over his own territory.

The Templars were to become victims of the greed of the King of France, Philip le Bel, who had long meditated seizing the riches of the Templars. The first attempt was to melt together the two military religious orders the Hospitallers and the Templars which was opposed by Jacques de Molay, Grand Master of the Order of the Temple (1308). But since the power of the Templars worried so much Phiip le Bel, he simply decided to get rid of it. Thus he would be able to lay his hands on their wealth, to undo the debts owed to them and to put the pope, his enemy and protector of the Templars, in a difficult position. After running several false rumors and slanderous allegations about the Templars to prepare public opinion, Philip le Bel ordered one of the most unprecedented military operation in the history of France.

On October 13, 1307, the King’s men at arms arrested at the same time all the Templars of France. The Knights did not even think of defending themselves as their rule prohibited them to lift their arms against Christians. The Templars are thrown in jail and all their properties confiscated. In order to be able to drag them to a court, Philip le Bel has them tortured so that they confess the worst crimes: denial of faith in Jesus-Christ, blasphemy, adoration of an idol named Baphomet, homosexuality, enrichment etc… By learning all this the people of France start clamoring for blood and Philip le Bel is only too happy to indulge them.

The inquisitor of France, Guillaume de Nogaret, directed the trial. Extensive use of torture and imprisonment tore away, to the whim of the judges, all possible confessions from the unfortunate Knights of the Temple. The most courageous of them retracted, then 45 of them were burnt at the stake near the door St-Antoine in Paris (1310) and nine others in Senlis. The Grand Master, Jacques de Molay and Geoffrey de Charnai, who had both confessed, recanted also and were burned on the island of the Jews near Paris (March 18, 1314). Pope Clement V officially abolished the Order of the Temple at the Council of Vienna in 1312. But it is only in France that the Templars suffer such severity. In England, for example, they were declared innocent, expropriated, but compensated.

But the folklore surrounding the “Templiers” does not stop there. On the contrary it begins and along with the gossip and speculations. Indeed, the idea of a treasure resurfaced some 700 years later. In 1946, Roger Lhomoy, a municipal caretaker, responsible for the maintenance of the feudal castle of Gisors (Normandy) made curious allegations. He claims that for years he has been conducting illegal excavations in the artificial mound of the castle. He states that he has discovered a secret chapel containing Templar sarcophagus as well as gigantic chests. Municipal officials go to check but find no treasure. In 1970, workers digging a trench near the castle’s ramparts discover a large bronze basin containing 11,359 coins struck in the X11e century at the time the Castle belonged to the Templars. This treasure is now stored in the National Library’s Medal Cabinet. But that is all that was ever found of the famous Templars treasure according to my little research.

It should be noted, though, that on the 25th of October 2007, an official document was released by the Vatican absolving the Templars and confirming their innocence of any wrongdoing. As for the treasure, it remains a conjecture that still inflames the imagination of the general population.