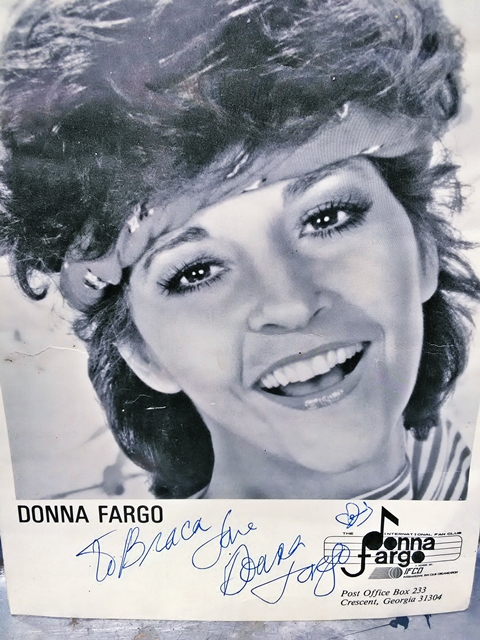 The other day, I spent some time in my attic house looking for some things.

Of course, I could not find them. There are a lot of things there.But I found a poster that is not mine.Maybe it was the property of my late cousin  or somebody else.On the poster was a photo of a young girl whose name was unknown to me.Below was a consultation.And maybe it was written by someone else.So ask me to explain to me whether it is a dedication written by Donna Fargo because it was her picture on the poster.

I want to know if the poster has some commercial value because it is very old.As I did not know about Donnie Fargo, I consulted the Internet myself.I realized that she was famous in her time.I quote “Donna Fargo (born Yvonne Vaughn, November 10, 1945, and Mount Airy, North Carolina) is an American country singer-songwriter, who is best known for a series of Top 10 country hits in the 1970s. These include” The Happiest Girl in the Whole USA “and” Funny Face, “which became crossover pop hits in 1972.Fargo has won major awards since her debut in the late 1960s, including one Grammy Award, five awards from the Academy of Country Music and one award from the Country Music Association. “-and quote.source: https: //en.wikipedia.org/wiki/Donna_Fargo

Once again, if someone knows whether it’s worth it, who can buy it and where to offer for sale leave it in the comment.For her gratitude, listen to her hit.