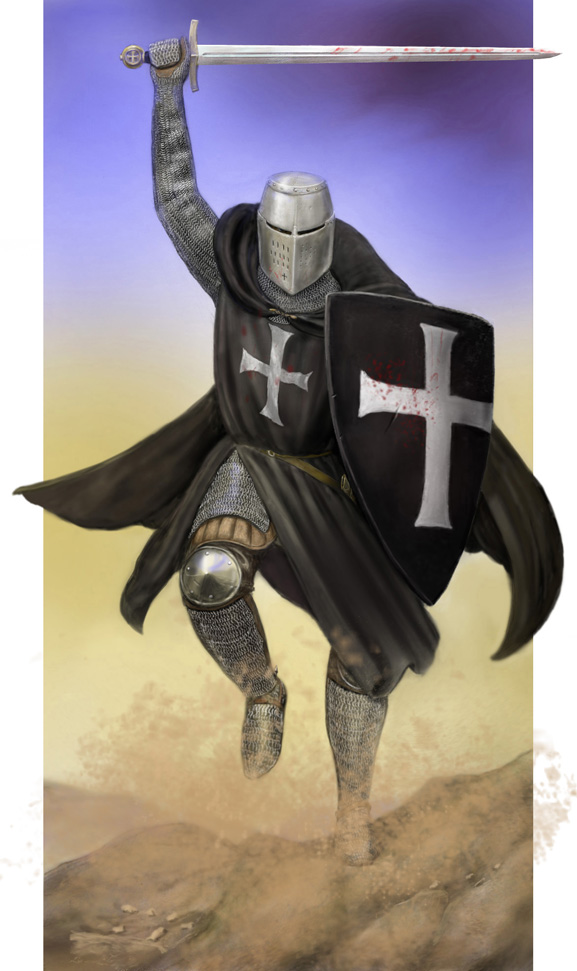 The “Chevaliers Hospitaliers”, also named Knights of St-John of Jerusalem belong to an order that was established in Jerusalem after the capture of this city by the Crusaders in 1099. It was, just like the Teutonic Knights, originally intended to receive pilgrims, provide for their needs and treat them in their hour of need and or diseases. As such, the beginnings of the Order of the Hospital (as it was sometimes called) were essentially for an evangelical purpose and its founder, a man named Gerard Thom, along with some merchants of the ancient maritime republic of Amalfi, started it in the middle of the 11th century. The order of St-John of Jerusalem – a monastic community dedicated to the management of the Hospital for the assistance of pilgrims in the Holy Land – became independent under the leadership of its founder Gerard Thom.

By papal bull on the 15th of February 1113, pope Pascal 11 puts the the Order of St-John under the tutelage of the Holy See, thus allowing the Order to elect freely his own leaders, without interference from other secular or religious authorities. Under this bull, the Hospital became an Order exempt from the Holy Church. All the knights, at that time in the history of the Order,  were religious brothers, bound by monastic vows of poverty, chastity and obedience.

Raymond du Puy (elected in 1120) became the first Grand Master and successor of Brother Gerard Thom. He organizes the Order and establishes a rule inspired by that of Saint Augustine (1135). This rule had a vocation of welcoming and helping the pilgrims in Jerusalem, but very quickly this mission included the provision of an armed escort on the roads of the Holy Land. Thus the “Chevaliers Hospitaliers” drift quickly towards a military order like the Knights Templar, with whom they often quarrel the outcomes of battles and conquests…But contrary to the Knights Templar, they wore a black overcoat adorned with an eight-pointed white cross and a black cape with a cross on the shoulder.

This Order, which always remained essentially French (from its origins) and by the number of its French Knights and French Grand Masters, was mingled for more than four centuries with all the events which agitated the Levant. However, at its beginning it had to fight against the Saracens, against the patriarch of Jerusalem and the bishops of Palestine which were all jealous of the privileges enjoyed by the “Ordre Hospitalier”. It is also said that the fighting between the “Chevaliers Hospitaliers” and the Templar Knights brought about the loss of the Holy Land during the Crusades era. But in fact, the papacy favored them so much that in 1143, Calixte 11 placed under their watch in Jerusalem the hospice of the Teutonics. The order, constantly receiving donations, became very rich.

In 1187, at the capture of Jerusalem by the Sarracens, the “Chevaliers Hospitaliers” had taken refuge in their stronghold of Margat, built on the promontory south of Lattakieh. But, as early as 1191, they settled in Acre which had just been taken over and defended it for a century until 1291, when the Sarracens completed the conquest of the Holy Land which the “Hospitaliers” left last.

They went to the island of Cyprus for a short period of time and then to Rhodes which they conquered in 1310 under the auspice of their Grand Master Foulques de Villaret. At that time they changed their name from “Hospitaliers” to Knights of Rhodes, a new title which was confirmed by Clement V, but they also still retained their old title. The Order, sovereign in the island, minted their own money and crossed a brilliant period until the capture of Rhodes on December 22, 1522 by Soliman the Magnificent. The Order then moved to Crete, then Messina, to Baies, to Viterbo and finally, on October 26th, 1530 landed in Maltes, yielded to the “Hospitaliers” by Charles Quint. The Knights then took the name of their new residence and were generally referred to from then on as the “Chevaliers de Maltes”.

They maintained themselves there, having to undergo many struggles for several centuries. The Knights of Malta first strove to fight the Ottomans and defend themselves against the attacks of the fleet of Soliman the Magnificent and became the Mediterranean sea police with their relentless fighting of the Barbary pirates. The Order of Malta soon climbed to the state of sovereign power. Even pope Clement V11, on the 15th of January 1524, gave the Grand Master of the Order the right to occupy the first place on the right of the throne when the pontiffs ruled chapters or read edicts or performed masses etc.

Jean Tommasi, named in 1802 and deceased in 1805 was the last Grand Master of the Order of Malta in an uninterrupted series since the eleventh century. Pope Leo X11 transferred the seat of the Order to the Roman states on April 12, 1827, and Gregory XV1 definitely installed it in Rome in 1831. However, having lost its military character and its territorial base in Malta, the Order eventually lost all true political weight.

There are still members of the Order of Malta as of today. The goal of the order nowadays is purely humanitarian. Its spiritual direction is now exercised by the Catholic Church.

I hope you enjoyed the history of the “Chevaliers Hospitalier” and please follow the journey on the next post (which should come up in January) on the great Knights Templar or “les Templiers”. (Yes, I will always quote some French on my post).

To all the Virily community, administration and writers alike, I wish you a Very Merry Christmas and a Great Happy New Year!