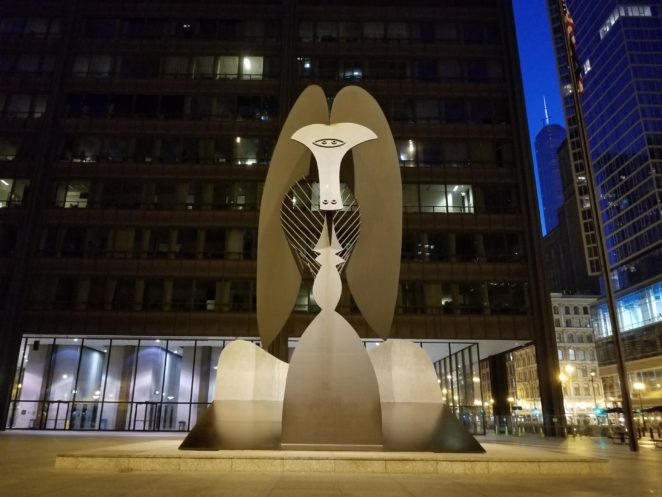 In this writing I have shared pictures of The Picasso; a Memoriam, and Miró’s Chicago. All three pictures were taken with a Samsung Galaxy S8 and shared as part of the 365 Photos Challenge.  The first picture is The Picasso,  which is a well-known sculpture in Chicago, given to the city on August 14, 1967. Created by Pablo Picasso, it sits in Daley Plaza across from Brunswick Plaza facing the two other sculptures mentioned in this writing.

The second picture is a Memoriam in dedication to the six individuals who lost their lives due to a fire started in a supply room on the 12th floor of the Cook County Administration Building in Chicago Loop.

And lastly, Miró’s Chicago, which was originally called The Sun, the Moon and One Star. Miro’s Chicago was unveiled in Brunswick Plaza on April 21, 1981. Created by Joan Miro, Miro’s Chicago’s shape is reminiscent of the famous Minoan snake goddess figurine from Crete.

If you are visiting Chicago, and just so happen to be in the Chicago Loop, I recommend visiting all three, which sit in the same sector.