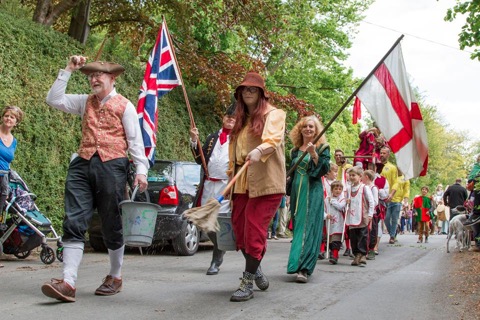 England is noted for its eccentric festivals that have their origins in medieval times but are still celebrated today for no reason other than to give those involved a good excuse for having fun. One such event is the “Wap” that takes place every year in the Gloucestershire village of Randwick, near Stroud.

The event dates from the Middle Ages and centres on the local delicacy of Double Gloucester cheese, but has also been known to involve the downing of much cider and beer. The rowdiness that resulted is probably the reason why the Victorians put a stop to it. However, in 1972 the local vicar decided to take a risk and revive the festival – it has been running ever since, much to the delight of locals and visitors alike.

The Wap, which probably takes its name from the Anglo-Saxon “wappenshaw”, meaning “an assembly of men who are ready for battle”, takes place in May with the first part scheduled for the first Sunday in the month. Three truckles of Double Gloucester (a truckle is a wheel of cheese around eight inches in diameter) are blessed at the church and one of them is rolled anti-clockwise around the churchyard by several parishioners. The original purpose of this was to ward off evil spirits, but today it is played as a game to see who can keep the cheese rolling on its edge for the greatest distance. After the roll the cheese is cut up and distributed, but the other two cheeses have another sort of role to play.

The following Saturday is the day of the Wap, when everyone dresses up in medieval and other period costumes for a procession through the village. The route is swept clear by the Mop Man, whose mop has to be kept wet enough to wash the path and flick plenty of water at the bystanders!

The procession focusses on two characters who have previously been chosen by the villagers for this honour. They are the “Mayor” and the “Wap Queen”, the latter being a teenager. Both are costumed appropriately and are carried through the village accompanied by their retinue of a swordsman, a flag-bearer, ladies-in-waiting and assorted princesses.

When they reach the Mayor’s Pool the Mayor is duly dunked in the pool before also being showered with spring water.

At the Well Leaze, which is at the top of a steep slope, the Mayor and the Wap Queen are presented with the two Double Gloucester truckles mentioned earlier. They then compete against each other by rolling the cheeses down the slope. They do this three times. The cheeses will eventually fall to pieces, and the winner is the one whose cheese breaks into the most pieces by the end of the third roll!

Needless to say, the event is a splendid day out for the whole village and plenty of other amusements are organized on the village field as a general fete.

The next day, of course, is another Sunday, when the vicar hopes to get as many people in the pews as were there the week before – assuming that everyone has sobered up by then!