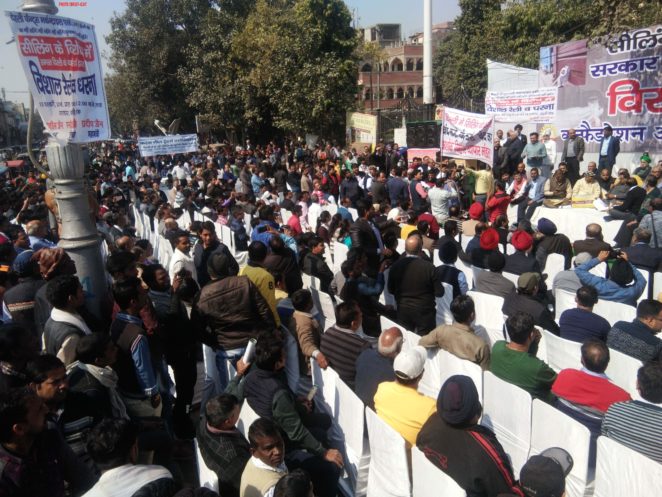 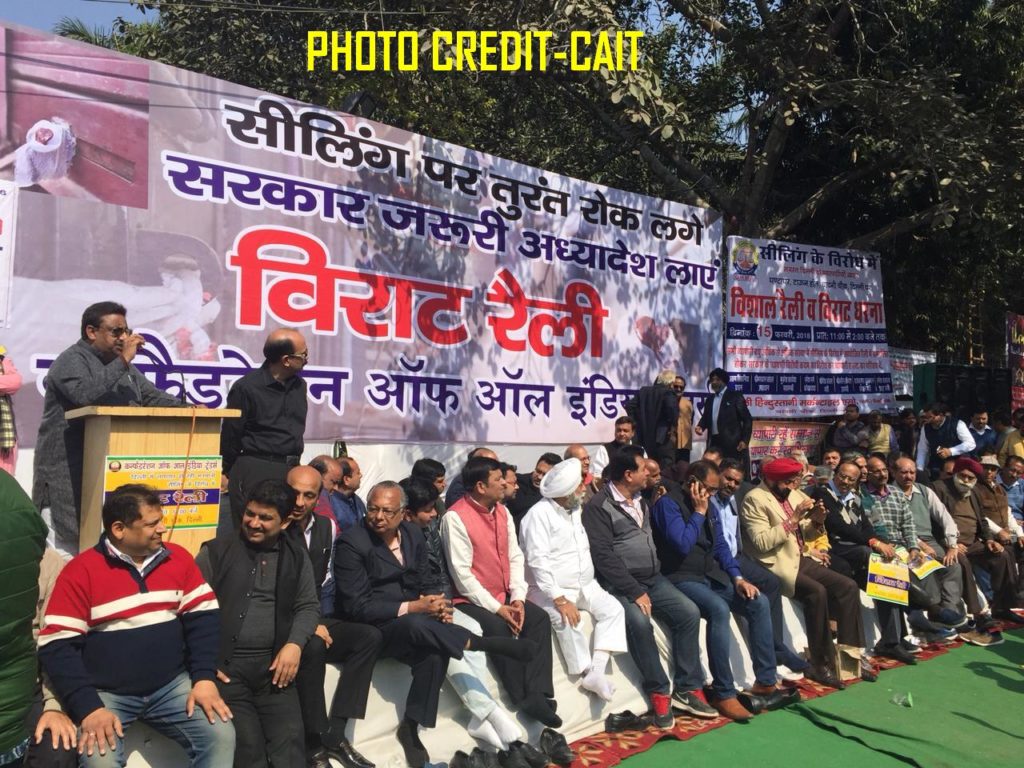 Thousands of traders from across Delhi today participated in a massive Rally at Ghntaghar Chandni Chowk in Delhi to lodge their strong & loud protest against ongoing sealing drive under the umbrella of the Confederation of All India Traders (CAIT). The protesting traders loudly demanded both Central Government not to sit idle and bring either an Ordinance or Bill Parliament to stop sealing in Delhi.On the other side, the traders also demanded that rule of law should be restored in Delhi by complying with due process of law as stated in the MCD Act,1957. The Monitoring Committee has kept aside all legal provisions on one side and conducting sealing in a most arbitrary manner be depriving the traders from their democratic rights.

The trade leaders at the protest took Delhi Government head on while asking it to desist from blame game and convene a one day special session of the State Assembly and pass the Bill to stop sealing and forward it to Central Government or bring an Ordinance, if it can. They also took all the seven MPs from Delhi in Lok Sabha and three MPs in Rajya Sabha for their keeping utter silence and said that perhaps they have forgotten that they are the elected representatives and many more elections will be held in future. Thy should not test the patience of the traders. It will not be political good for the politicians or political parties to keep mum while sealing remains in progress.

CAIT Secretary General Mr. Praveen Khandelwal said that at a time when current Master Plan is in its last leg, the Government should immediately began preparations of new Master Plan 2021-2041 and for that purpose constitute a Working group under the Chairmanship of Lt. Governor of Delhi consisting of trade representatives, senior officials, town planners, architects and other experts.

He further said that the apex Court observed that alleged mess in Delhi happened with connivance of one and all then why only traders are being targeted. Why the Monitoring Committee is not recommending any action the officials and others under whose tenure all such mess has happened.

Mr. Khandelwal lamented that even the Courts do not punish the accused in first hearing and give ample opportunity to place his defence whereas the Monitoring Committee has gone several steps forward and no opportunity is given to anyone for placing his defence while conducting sealing. The democratic norms are openly being flouted in the Country’s capital and everyone is silent.

The traders at the Rally demanded both Delhi and Central Government to wake up from slumber and must understand the future implications of sealing and its impact on economy and trade of Delhi and take immediate steps to stop sealing.