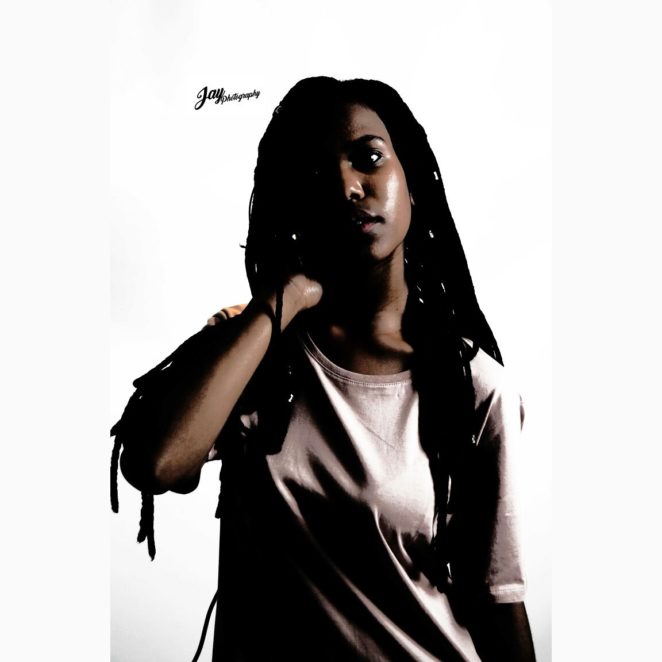 A story of stubborn survival

With nothing for company, but a huge glowing ball of fire in the sky- a little girl runs across sharp pointy blades. Her feet barely grazing the blades, she flies with the wind. They form a long ominous line with neither end nor beginning in sight. She has been running for a long time now. She could keep running but where would she end up? Was there an end at all? What was she running towards? Would it be better than this life she has grown accustomed to? She had become used to this too, a million questions and not a single source of answers.

Head down, hands nervously tugging at her two ponytails, she wearily retires to sit cross- legged in front of the gigantic glowing ball of fire. Occasionally, she pulls at the ribbons in her hair. They used to be all shades of neon and pink, her mother always had a penchant for bright colours.  She could barely tell their colours now. She wanted to raise her head, gauge in her surroundings but she knew what she would see, thick darkness where the light of the ball didn’t reach and vast emptiness everywhere else. Emptiness lined with menacing blades. Their sharp, pointy edges glinting brilliantly in the night. They could have almost been beautiful, a work of art… Everything here could have been beautiful if it didn’t fill her with a hopeless terror…

So she let her eyes fall to her knees instead, covered by a thin flimsy dress. It used to be clean too, a blinding white, with three roses sewn across the hem.  Now, it was just a muddy brown with dark spots where the roses used to be. They probably fell off the last time she ran. She is always running, she can hardly remember a time when she did not run. Strange though, that her feet remain unscathed after the million miles that she has sprinted. But sometimes when she runs, she feels excruciating pain, deep in her soul. She feels stabs and jabs piercing her heart. Those blades, those menacing blades, they leave her body unscathed and ravage the fabric of her being.

When the pain becomes too much to bear, that is when she makes her way to the glowing ball of fire, to catch her breath until she is strong enough to run again. She looks at her ribbons and roses, desperately trying to ignite memories of a world that she was wrenched from.

She has no idea how she got here, here where her cries bounce off unseen walls, here where her shaky voice echoes into the night -forcing her to accept that she is all alone.

Most importantly, how does she get out?

What wouldn’t she give to feel the sunlight on her skin again, to feel the rain on her face… But maybe, just maybe, if she runs long enough she will find an exit, cleverly hidden somewhere in the dark. But who is she kidding, she always finds herself sitting in front of the glowing ball anyway, too weak to move, her spirit torn into shreds.

So much fire… Condensed into a ball, swirling and churning into itself, almost as if it had a mind of its own. She had never seen so much fire before she got here. It follows her when she runs, blazing, watching silently. She can never hide from it. It scares her a great deal, so she always makes sure not to look at it directly. A while back, she dared to look at it and she felt it pulling her in, tugging at her heartstrings, almost as if it was beckoning her to jump in. It pulled her towards itself like a black hole, a burning black hole. She has not quite figured out if it is a friend or a foe. Sometimes it casts a warm light on her, giving her splinters of hope. And some days, some days it burns her, it feels as if its heat peels the skin right off her back, exposing all her flaws. So each time she approaches it with her head bowed and humbly takes what it gives.

The fear is always there too, it has become a constant part of her days, she doesn’t remember the days when it wasn’t there, she doesn’t remember if it was ever absent. It lodges itself in her gut, wrenching and strangling her intestines, demanding attention. When given too much, it has a tendency of seeping into her mind and gnawing at the edges of her sanity. So she supresses it and ignores its existence, wondering if this is her life now, if  this is what she was made for- to run, burn and have her spirit mercilessly gorged to death.

With all these heavy thoughts swimming in her mind, she stands up, hands clasped in front of her.  She feels it… Acceptance… Acceptance of her fate, as it painfully settles into her soul. She glances at the blades with a look of resignation, their pointy edges illuminated by the light. Slowly lifting up the hem of her dress, she tentatively walks towards them, praying and hoping that they won’t kill her this time. Unexpectedly, she feels peaceful warmth descending upon her. Almost as if the fire was communicating with her, in a peculiarly calm and still voice, urging her to go on and run. She had never imagined the fire to have a voice like that, so beautiful it could stop time. Her painful acceptance turned into steely resolve, the fear disappeared, and in its place was unshakeable faith. When she looked at the blades again, it wasn’t with resignation but with fire burning fiercely in her eyes.

She flew over the blades with renewed strength. And for the first time, not only were her feet unscathed but her spirit too.  Where she went, she left a trail of fire on the blades. She was soaring, with the wind struggling to catch up.  The glowing ball blazed brighter as it watched the little girl, its unrelenting light illuminating her path. What a majestic sight it was when she exploded into different shards of light, magical hues that engulfed the darkness and lit up the universe.

How marvellous, how beautiful it was , when she finally became the light, the hope she was desperately seeking…