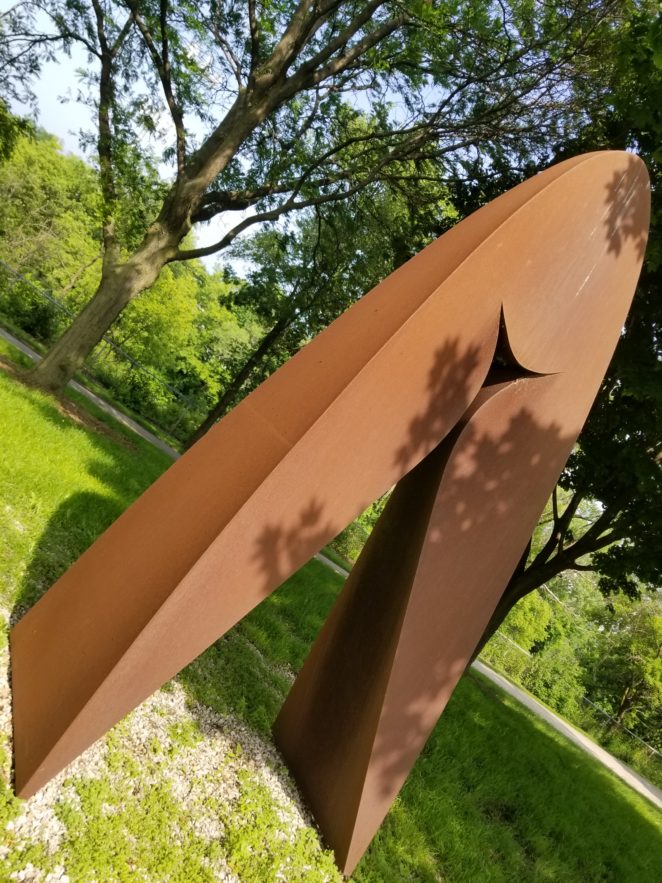 My most recently shared sculpture from this park was titled ‘Voltive Head 2000’ by Stacy Latt Savage, however, today’s shares are ‘Feminin’ by Rudiger Seidt and ‘Groundbreaker’ by Ted Gall. Both features are shared as part of the 365 Photos Challenge and taken with a Samsung Galaxy S8.

Our first feature ‘Feminin’ represents the lower half of a woman’s body.  The sculptor, Rudiger is a self-taught artist who learned his craft as an engine fitter in his native Germany.

Our final feature ‘Groundbreaker’ is the first and largest of Ted’s Fel-Pro sculptures to be installed on the property that is known now as Skokie Northshore Sculpture Park.  The sculpture is made of sheet corten steel, cut and welded into large hollow forms with peg shaped elements along the side which represent pieces removed from the holes in the main part of the sculpture. As a long-time artist of Fel-Pro, he often used gaskets as a theme for his work, which were the main product of the company. With that said, I hope you enjoyed these shares from Skokie Northshore Sculpture Park.