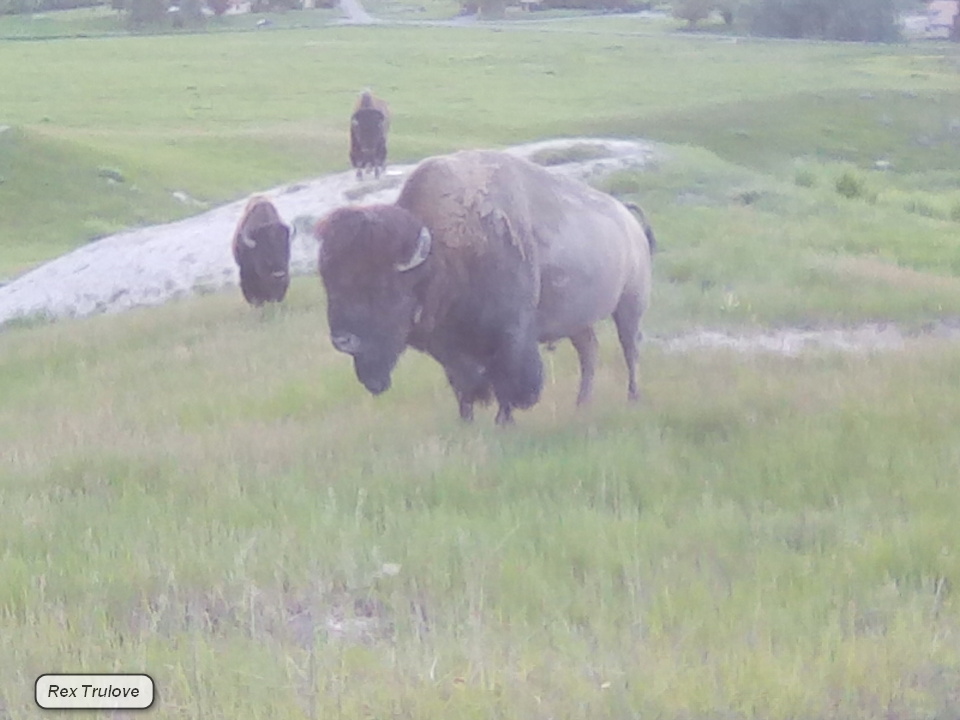 If you’ve never seen an American bison (Bison bison), you shouldn’t feel alone. These enormous creatures once roamed in vast herds that numbered in the millions. There aren’t many left now, thanks to the wholesale slaughter of the animals.

The slaughter was mostly because Native Americans often relied on the animals for food, coverings for teepees, clothing, and tools. It was thought that by destroying the animals, settlers could control the Native American population. Of course, this didn’t work. It simply killed a lot of animals that were then left to rot.

Right now, there are only isolated pockets of wild bison, though some are also raised and bred for meat. Among the places where they are still found in the wild are Yellowstone National Park and the National Bison Range in Northwest Montana. Yellowstone is the only place in America that bison have existed continuously. 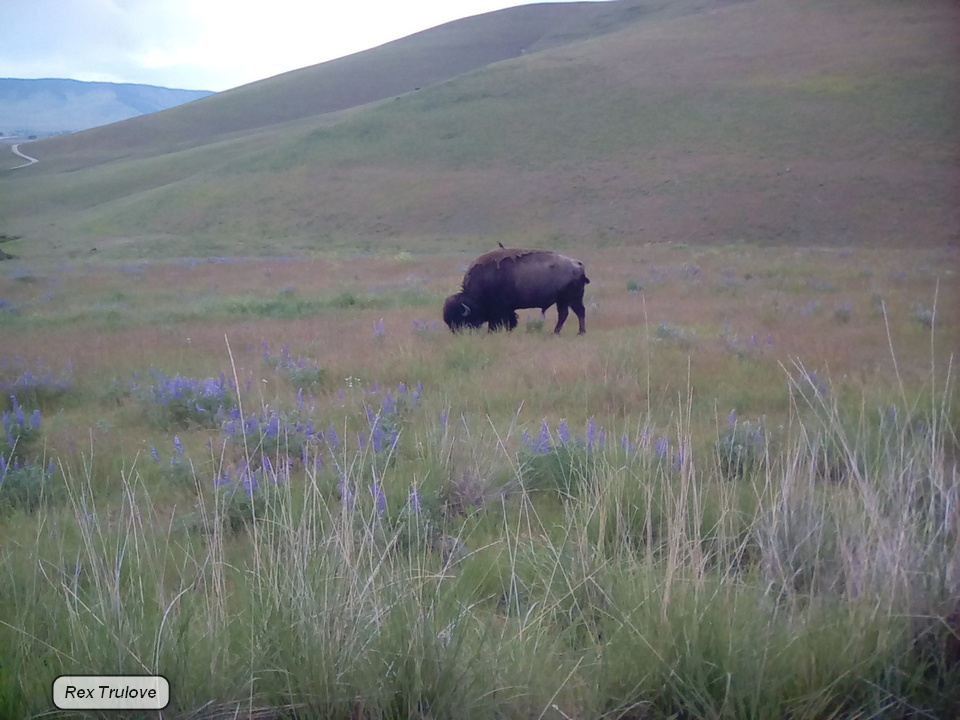 The total population of wild American buffalo was once numbered in the millions but is currently estimated to be about 500,000 animals. Of those, only 25,000 – 50,000 are wild. This is still better than it was when they were nearly wiped out. In the late 1800s, the total number of American bison left alive were only a few hundred and only 23 of them were wild. These bovines are relatively long-lived, though, and can live 30 to 40 years.

Only conservation efforts by a few individuals, Native American tribes, and a few agencies saved the American bison from extinction. President Teddy Roosevelt was one of the people who was dedicated to the preservation of the bison.

This picture was taken about 15 feet away from this bull

American bison are often called buffalos, though they are only distantly related to true buffalos like the water buffalo. They are more closely related to oxen than they are to buffalos. American bison are actually even closer related to European bison (Bison bonasus), also known as the wisent, though they are different in many ways. They are members of the bovine or cattle family and they really are huge. A bull can stand six and a half feet tall at the shoulder and can be 10 to 12 feet long. A bison can also weigh well over a ton, though most are less than 2,000 pounds.

Bison have a thick mane of shaggy hair and the hair on the face and throat is denser and longer than on most members of the bovine family, except yaks and musk oxen. The front legs are also longer than the rear ones, so the back slopes upward from the rump toward the shoulders. They additionally have a shoulder hump so the head is usually quite a bit closer to the ground than the shoulders are. Both the bulls and the cows have curved horns, though those of the cows are smaller. 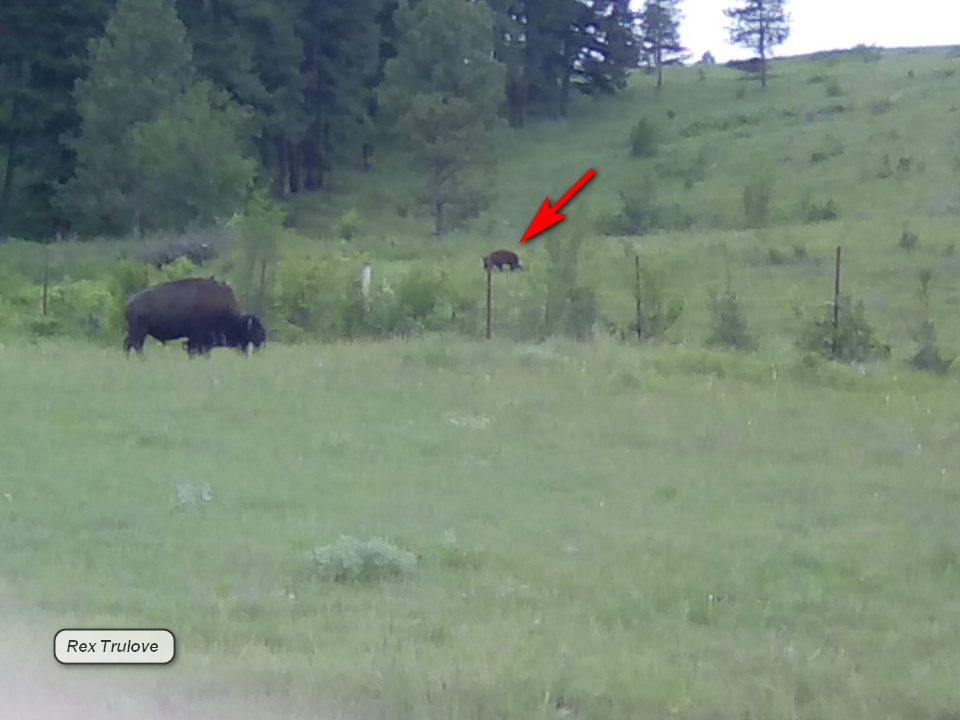 This picture was taken at the National Bison Range. Notice the grizzly bear that the arrow is pointing at. The bison was totally aware of the bear, but the bear wisely walked on by. This was a young grizzly and probably only about 300 pounds. The bison in the picture probably weighed close to 1,000 pounds.

Except during breeding time, bison bulls are solitary or group up in small herds. The cows and calves herd together and the herds are led by a cow.

The breeding season is from June to September, with most of the breeding taking place in July and August. About 270-290 days after the cow is bred, she drops (gives birth to) a single calf. The calves are generally born in April or May and weigh around 35 pounds at birth. The calves are vigorously protected by the whole herd.

Like other members of the bovine family, American bison are herbivores and eat primarily grasses and forbs.

These animals are swift, running about 35 miles an hour and they can jump four or five feet high. Bison are well adapted to snow and bitterly cold weather, too, and can root down through snow that is almost as tall as they are, to get to food. Additionally, they are excellent when it comes to swimming.

This animal has poor eyesight (they are extremely near-sighted), but they make up for that by having excellent senses of smell and hearing.

American bison are quite majestic animals and they are interesting. They are also dangerous. Every year, people are seriously injured by trying to get near the big animals. This is an animal that is unpredictable and it has never been successfully domesticated. Despite warnings, though, more people are injured yearly in Yellowstone National Park by bison than by bears.

Not only is this the largest land animal living on the North American continent, they are also capable of causing a lot of damage to a careless person. By all means, if you have the chance to view them, do so. However, please do so with respect and don’t try to get too close to them.