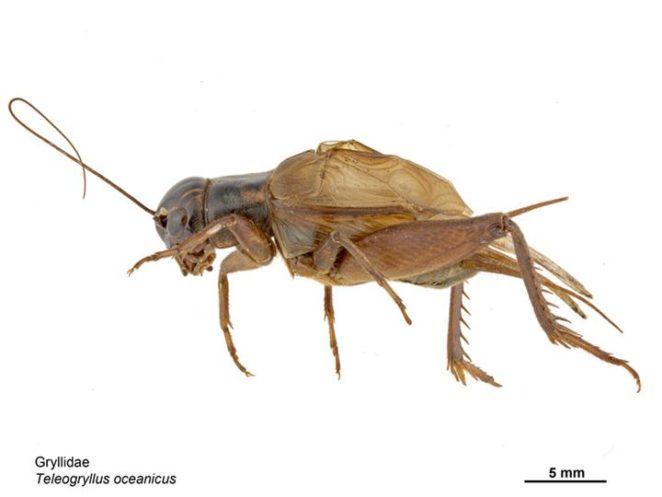 It is well known that male crickets attract females by “singing”, which is actually a sound made when they rub their wings together. This works because the wings have ridges and bumps that are scraped against each other. Without those rough bits there would be no “song”.

So why have the oceanic crickets (Telogryllus oceanicus) on Kauai and Oahu (Hawaii) lost these ridges and are therefore no longer able to sing?

This is an example of evolution that appears to have worked to the disadvantage of a species. If the males cannot attract females how can they procreate?

The problem for the crickets was that the singing did not only attract female crickets but also a parasitic fly with the botanic name Ormia ochracea. These nasty little beasties laid their eggs on the crickets and, after hatching, the larvae proceeded to eat the crickets alive.

The crickets with the quietest songs – due to having less prominent wing ridges – stood a far better chance of surviving these assaults and so managed to father the next generation of crickets. Their offspring would also tend to have smoother wings, and thus be able to pass on the “flat wing” gene.

The net result has been that 95% of the island crickets now have completely flat wings and make no sound at all when they rub them together.

This is a fascinating example of how evolution operates. The original process of developing ridges and bumps would have worked to ensure that the strongest singers produced more offspring, but now the opposite is the case.

There are two very interesting aspects to this story. One is that the male smooth-winged crickets continue to rub them together vigorously despite producing no sound whatsoever. It is a behaviour that is so deeply ingrained in their genes that they have no choice but to produce silent songs!

The other question is: if the male crickets can still attract females – which they obviously can – why did they need to sing in the first place? Presumably the answer to that is that evolution will always favour the strongest members of a species, and that strength will therefore be passed down the generations, but when that strength becomes a liability, weakness itself becomes a strength!

In other words, although the best adapted members of a species will always attract the most mates and produce most offspring, that does not always mean that the less attractive members will fail to reproduce. If the strong specimens are removed from the scene, the weak ones will come to the fore.

Maybe this is an example of “In the country of the blind, the one-eyed man is king”!