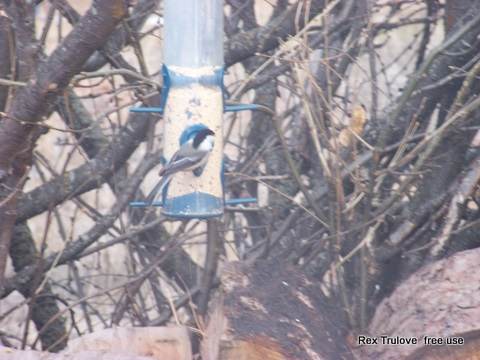 This picture was taken in the backyard the year we moved to Montana. I’d noticed that there were black-capped chickadees flying around from branch to branch in the bushes, so I filled a bird feeder with wild bird seed and hung it up by our wood pile. I’d barely begun to step away from the bird feeder before several chickadees let me know that they were quite interested in the bird seed and weren’t particularly concerned about me.

This picture was taken from a distance of about six feet and this male chickadee is totally aware of my presence. He is also unbothered by me being there and taking his picture. His mate is to the right out of the frame, eating some seeds that I’d put on one of the pieces of firewood that can be seen at the bottom of the picture. The bushes behind the bird and birdfeeder are a hedge of mountain ash. This was taken in the late fall after the leaves had fallen, so there are no green leaves to see in the image. Normally, this bush would be totally green with leaves.