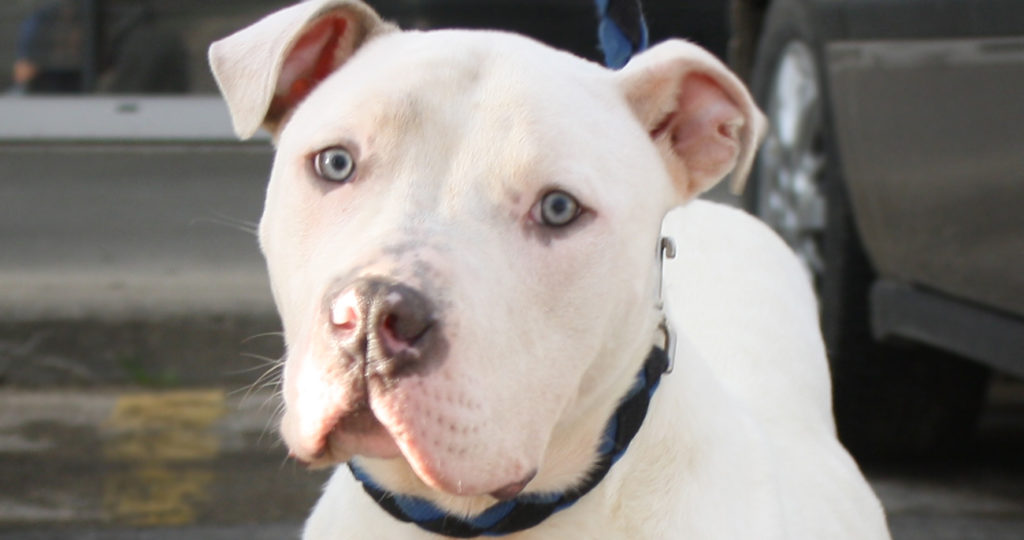 Talk about having two strikes against you in life. A three year old Pit Bull named Dallas was very close to be put to sleep in the province of Ontario Canada when Dallas and 30 other Pit Bull puppies were the police in Ontario and some members of the Ontario Society For The Prevention Of Cruelty To Animals (OSPCA) since Pit Bulls are banned in Ontario and the Pit Bull breed has a bad image thanks to the media who report the cruelty like having puppy Pit Bulls get involved in dog fighting.

Thanks to Rob Scheinberg who is the co-founder of a rescue and sanctuary in Ontario called Dog Tales, he hired an attorney to spare the lives of the pit bulls that were taken to an animal shelter after the raid of the dog fighting dog ring that had five persons arrested on charges of running an illegal dog fighting ring.

Only three Pit Bulls puppies either were put to sleep or died in custody. Dallas along with the 17 other Pit Bulls were sent to rescues or adopted.

Thanks to a group called Pit Sisters which is a group that finds homes for dog breeds that are not wanted by the majority of dog owners, 10 pit bulls were assigned to that group. The dogs then are sent to prisons where they become the companions of inmates in an attempt to turn their lives around from living in the bad side of the law to good citizens when they leave for a new life after they pay their debts to society.

Thanks to Carol Skaziak who is the founder of the not for profit group named Throw Away Dogs who has dogs sent to veterans and children with special needs, she saw the potential of Dallas leaving his job at a correctional center in Jacksonville Florida to work with the Honaker Virginia Police Department as a dog who will be sniffing out drugs.

Thanks to Dog Tales footing the bill to have Dallas trained to sniff out drugs in training, Dallas will be joining the Honaker Police Department next week to become the first Pit Bull police officer who will be working with a new handler.

Famous old saying is “When one door closes, another one is open.” My belief is all dogs are not evil monsters, some of them through no fault of their own become bad when they are trained for dog fighting which is outlawed, not the Pit Bull breed.