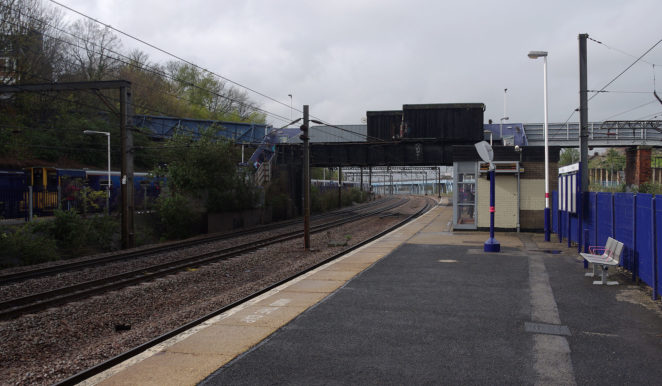 My first professional library post was in London, and my wife and I lived in a top-floor flat that overlooked the main line from Kings Cross to the North. This was also close to Harringay Station (see picture), so I had quite a straightforward journey to work.

At least, it was usually a straightforward journey, apart from the time when I was a bit late for my usual train and got on the one that was waiting at the platform I usually used, without checking where it was going to stop.

As a result, the train sailed through Harringay Station and did not stop until it reached Alexandra Palace, two stations up the line.

No problem, I thought, I’ll just get on the next one heading south, even if it means I have to go all the way back to King’s Cross. There was a train waiting on the adjoining platform, the sign on which read King’s Cross, so I promptly got on board.

However, when the train moved it headed north, not south. I had, naturally enough, relied on the sign that was telling me where the train had come from, not where it was going. This happened to be Hertford North, which, although some distance from where I wanted to be, was not a complete disaster as far as getting home in reasonable time was concerned. There were plenty of trains that went from Hertford North to Kings Cross, including many that stopped at Harringay. No problem.

At Hertford North, I saw a train that fitted the bill, standing at the platform for southbound trains. I got on board, confident that I could not possibly make the same mistake twice.

Of course I could. How was I to know that the platforms had been switched for operational reasons that week? Next stop Peterborough.

As I stood on the platform at Peterborough, 75 miles north of where I should have been, I realized that any further slip-ups could have much worse consequences, given that trains from here ran to York, Newcastle and Edinburgh. I therefore made absolutely certain that my next train would go south.

I now had two worries. One was what I was going to say to the ticket inspector when he questioned why I was on a train from Peterborough when my ticket only allowed me to travel as far north as Harringay. Fortunately, he was in a good mood that evening and let me get away with it.

My second concern was what my wife was going to say when I eventually got home. Had we had a dog, there would be little doubt that my dinner would now be inside it, but it was her withering stare and expressions of contempt that I was not looking forward to.

Oddly enough, the story I told went down quite well. I think she was happy to have an example of my monumental stupidity that could be stored away in the memory bank for use on some future occasion.

Needless to say, I did not make the same mistake again. Shortly after this, I switched from trains to buses as my means of getting to work.