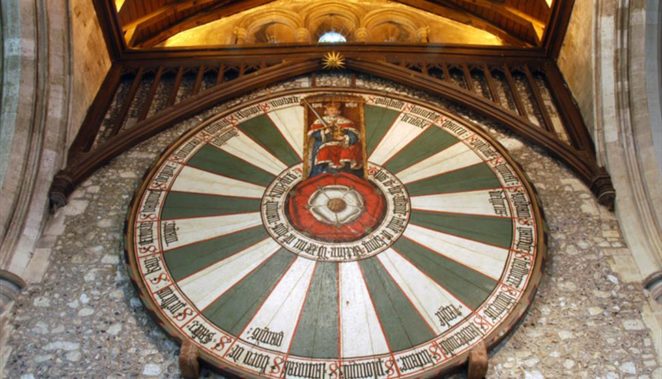 Winchester Great Hall (Hampshire, England) is just about all that is left of Winchester Castle, built by William the Conqueror in 1087. The hall was extended by King Henry III in the 13th century and has been described as the second finest medieval hall in England – the first being Westminster Hall next door to the Houses of Parliament.

It consists of a double cube of five bays, with aisles supported by shafts of Purbeck marble.

The feature that most people come to see is “King Arthur’s Round Table”, which hangs from the wall at one end. King Arthur presides at the top, with places marked for each of his 24 knights.

However, there is absolutely no reason to believe that this has anything to do with King Arthur. The wood has been dated to the 14th century, and it would appear that the table was constructed in the hall and hung on the wall in 1348.

The decoration is somewhat later, with every chance that it dates from the Tudor period of the early 16th century. Evidence of this can be seen from the Tudor rose at the heart of the table, and the fact that King Arthur bears a striking resemblance to the young King Henry VIII.

Whether anyone ever connected the table to King Arthur prior to its Tudor decoration is open to speculation. However, it would appear that somebody had the bright idea of doing so in response to a renewed interest in Arthurian legend that was characterized by Thomas Malory’s highly dramatic and imaginative “Morte D’Arthur” which was published in 1485 and printed by William Caxton. Why not link young King Henry to his legendary predecessor?

There can be no doubt that many people have believed down the centuries that this really was the Round Table, and it must therefore be assumed that the trick worked at the time, thus giving Henry a boost that was welcome if wholly undeserved!