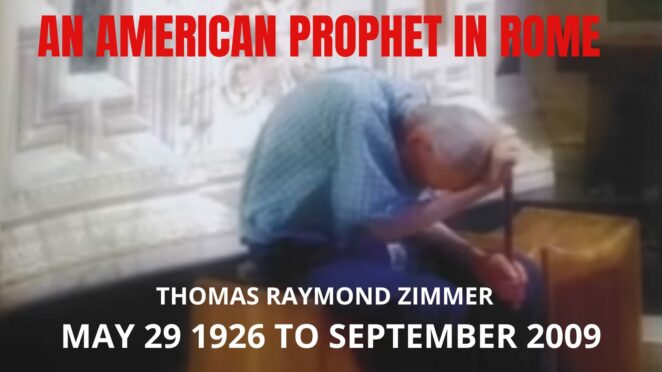 John-Henry Weston of the J. H. Westen Show tells of Someone who had prophesied in 1983 that Donald Trump would bring America back to God well the other day he met a close friend of his, who came over and mentioned that he knew about such a prophecy and that it was actually contained in a video, which had gone viral a few years ago and had been recorded by an Italian Catholic priest, father, Giacomo Capoverde and that the video had been viewed over half a million times.

It recounted the story of that priest’s visit with a Catholic holy man in Loretto Italy he called him the Hermit of Loretto, but who was actually an American WW2 veteran, Thomas Raymond Zimmer. Although the prophecy about Donald Trump wasn’t actually given to Father Capoverde directly but to the priest’s friend, an American psychiatrist doctor, Claude Curran, from Massachusets whom the priest spoke about it in his video.

This video interview is with that doctor, Claude Curran. In this fascinating story doctor, Curran mentions, that we need to experience hardship and suffering in this life, to develop. He uses this example; we have to suffer; we suffer going to school to learn the skills which enable us to be a better person and when we don’t make ourselves suffer; we make everyone around us suffer. I.e., the parents of the incorrigible child who won’t go to school then suffers. (JOB. 33)

So, through Jesus’s suffering, he transformed his own suffering into a divine currency for us and that’s why we can all take part. People who don’t experience suffering, don’t understand the fruits of suffering, like discomfort, emotional hardship, humiliation, even pain so they avoid it at every turn. (JOB 33)

Here is doctor, Claude Curran, in a fascinating interview with John Weston.