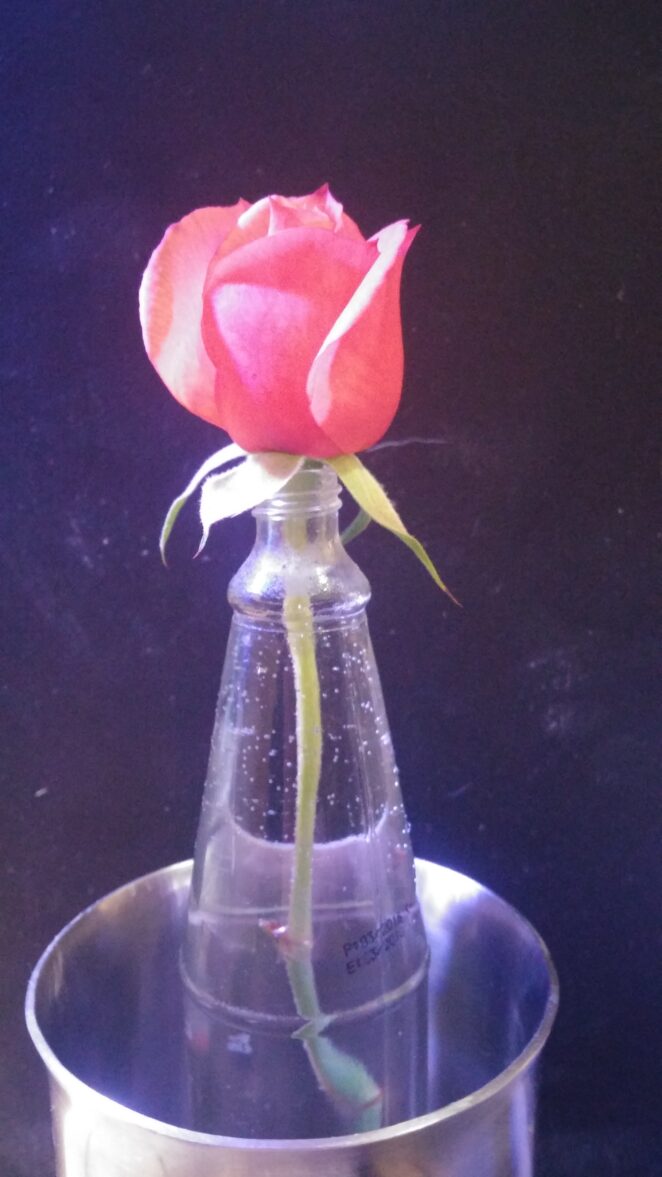 It’s called a Lenten rose or Christmas rose (Helleborus) is a perennial flower that blooms in winter. It sports leathery, dark green leaves which stand umbrella-like above winter mulch or snow. … Those dead leaves provide winter protection to this robust flower. While there are some winter-blooming flowers, the only ROSE is the Helleborus.

This story is not about the Helleborus rose, it is about a very ordinary bi-colored slight rose. While it’s peers, all bloomed in early spring of 2019 and even surprised us with a few stragglers wishing not to be denied their days in the sun, albeit a faint winter sun at that. One particularly chilly morning, Daleen, my wife braved the bite taking our reluctant quadrupeds for their ablutions a task I would happily do, but, sadly, had I the task, we three would at the very best, be approaching a state of suspended animation, by the time I had traversed the non-wheelchair friendly route to StinkinPark.

So, double Kudos to her!

When she got back that morning, she handed me this tiny, ruby-red rosebud protruding from a tiny Tabasco bottle. “It, 5 degrees C, outside, i.e. #@*!! cold. I watched this little fellow braving the cold and thought, sorry Buddy, you’ll just have to get yourself a wonderful start, come next springtime. Then, we had that dreaded frost the next day and my heart was very heavy for Buddy. When I got to Stinky Park, I didn’t want to see Buddy, drooping, and bruised from the frost But my curiosity got the better of me,  I looked… And to my amazement, there Buddy stood amongst the other hibernating rose bushes, the emerald green of his stem and petals from which he was a clipping, proudly gleaming and swaying in the chilly morning breeze, flashing his deep red unfolding petals proudly to the morning sun.”

My good lady moved Buddy’s green host-plant to a spot under the roof covered awning and brought Buddy to me. “just talk to him, she said. “Say pleasant things about him, tell him how wonderful he looks, and how proud you are of him, don’t stop doing it!”  And, so I did, reluctantly at first but I remembered how a Japanese Professor Masaru Emoto had for over 20 years, studied the effect of spoken English words, to freshwater samples, and how remarkably the molecular structure of the water had changed. Not only was Buddy standing in water, but there was also water inside his cells.

20 Days later, one of Buddy’s petals dropped off, and I realized that try as he may, all organic objects must eventually die. It was 3 more days when his last petal fell off… Let’s just say, having witnessed what had seemed impossible to me before has resulted in there being one there was one less skeptic on earth

Daleen took what remained of Buddy’s plant detritus and returned it to the soil in the pot. When she checked the next day, three more Buddy’s in varying developmental stages were visible. The one, in the image, is the largest of them now stands here on my desk!

NOTE: At best, roses seldom last for longer than 7 days in a vase with fresh water. Roses have a lifespan of about seven days maximum once they are cut. By taking optimum care of your bouquet, you can keep the blooms looking fresh and beautiful, for about 7 days at which point the petals are shed and the stem dies.