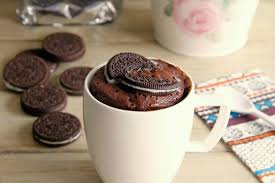 For me, the most depressing aspect of mug cakes is how much work they require. Flour, sugar, leavening agents, and measuring spoons are all needed, but the end product still borders on the wrong side of mediocrity. Most mug cakes humiliate makers with their inferiority, which also does nothing for depression, by the way.(lol)

Anyway, I recently, kinda, watched an Oreo Mug-Cake being prepared in a video on Instagram, somewhere? Where their recipe was described as “magical.” I would not use that word to describe my version of it, but this mug cake is better than any other mug cake I have ever had. Taste- and texture-wise, it ranks somewhere in between a molten chocolate cake, and a BJ’s Pizzookie, a bit lighter in flavor, but WAY LESS effort required to do.

Theoretically, all you need to do is throw 10 smashed cookies into a mug, pour in enough full-cream milk to fill half the mug (about a third of a cup), and mash until you have a consistent Oreo sludge. The mug goes into the microwave for 2 minutes, (Be careful, microwave oven temperatures vary from brand to brand). Next out, comes your sticky Oreo cake.

In practice, my Oreo mug cake differed only slightly from what they presented in the original video. I had to microwave mine for a full 2 minutes, as it was very liquidy at their suggested 1 minute—I also, had to add two extra Oreos to make a thick sludge. (Their Oreo cake takes eight dry Oreos to fill the mug, but mine took 10 in total to get the batter where I wanted it.)

The first Oreo mug cake I made was moist and warm, (using 8 Oreos) but it was not as chocolatey as I had expected it to be, so I made another one, using 10 Oreos which (amazingly) made it more chocolatey. All in all, this was still the best mug cake I’ve ever tasted, and it would be particularly good with vanilla ice cream.

It’s not quite a quarantine, depression fixer—it’s more of a polite request for help—but my Oreo mug cake does not pretend to be anything it’s not. Rather than masquerading as “actually quite good!” it embraces the inescapable desperation that leads someone to such a confection in the first place. “Smash the cookies,” it says, “crush them real good and make a gooey sludge.” If that’s not a fitting mood for these depressing times, I don’t know what is.