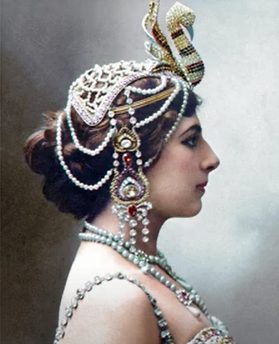 This woman was a really tough Dutch cookie during the first world war.  She was born on August 7, 1876, in Leeuwarden, Netherlands, Mata Hari was a professional dancer and high-class mistress who accepted an assignment to spy for France in 1916. One highly enthused French journalist of the day, wrote in a Paris newspaper that Mata Hari was “so feline, and extremely feminine and majestic, with the thousand curves and movements of her body trembling in a thousand rhythms.” Another journalist in Vienna wrote after seeing one of her performances that Mata Hari was “slender and tall with the flexible grace of a wild animal, and with blue-black hair” and that her face “makes a strange foreign impression which weakened the knees of all men who saw her perform.”

In1915 during World War I, the Netherlands remained neutral, so, as a Dutch subject, Mata Hari was able to cross national borders freely. She traveled between France and the Netherlands via Spain and Britain, to avoid the battlefields and her movements inevitably attracted attention. During the war, Mata Hari was involved in what was described as a very intense romantic-sexual relationship with a Russian pilot serving with the French military, the 23-year-old Captain Vadim Maslov, whom she called the love of her life. Maslov was part of a 50,000 strong Russian Expeditionary Force sent to the Western Front in the spring of 1916.In the summer of that year, Maslov was shot down and badly wounded during a dogfight with the Germans, losing his sight in both eyes, which led Mata Hari to ask for permission to visit her wounded lover at the hospital where he was staying near the front. As a citizen of a neutral country, she would not normally be allowed near the front but was met by agents from the French Deuxième Bureau, (secret service) who told her that she would only be allowed to see Maslov if she agreed to spy for France. She subsequently agreed and entered into several brief sexual encounters employing her magnetic wiles on several high-ranking German officers and reporting back to her handlers at the French Deuxième Bureau headquarters in Paris.

Unaware that Crown Prince Wilhelm of Germany had no military experience or information, and as such did not have anything to do with the running of the German Army. The Deuxième Bureau offered Mata Hari one million francs if she could seduce him and provide France with good intelligence about German plans. She reported back several times with valueless information after which they had wrongly assumed, that she was deliberately withholding strategic information. Mata Hari had informed the Deuxième Bureau that Prince Wilhelm II had no military information to give her but in spite of repeatedly pleading her innocence, they found her guilty of being a double agent.

Mata Hari was executed by a firing squad of 12 French soldiers just before dawn on 15 October 1917. She was 41. According to an eyewitness account by British reporter Henry Wales, she was not bound and refused a blindfold. She pleaded her innocence to the end and defiantly blew a kiss to the firing squad when they opened fire.