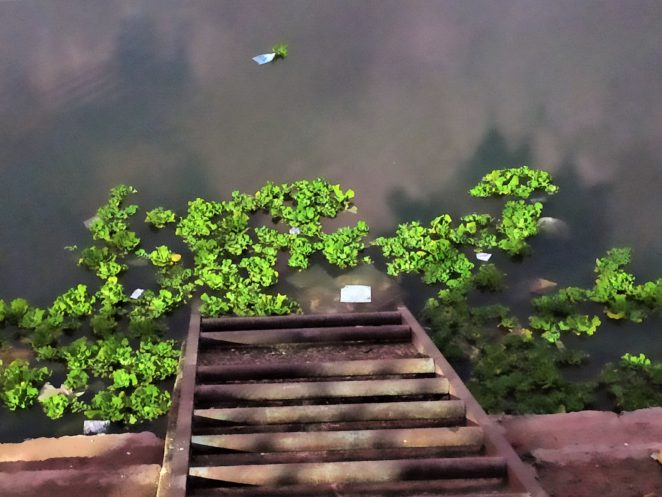 Sitting at the top pf the stairs leading to the lake below, looking down at the sky his feet, his fingers wove a epic on paper.  Inspired by the fluffy tufts of cotton like clouds in the clear water was he writing about the soul of his beloved?

Perhaps he was writing about the struggles of his mind, as he tried to survive another night without his lady love beside him. Or maybe it was a timid poet expressing his undying love for his lady because he was tongue tied when he laid eyes on her.  Whatever he was writing, sadly his words failed to mirror the poignancy of his soul.  Words did not come to his aid at his moment of emotional eruption. Frustrated he ripped the pages apart and flung them in disgust, letting the water cabbage deal with the conflict in his heart.

The fishes came upon those lofty words and knew not what they meant. It was plain that another forlorn human was here, who left his trash behind because he could no longer bear to carry the weight of his world on his own shoulders.

P.s. Though this was written with sarcasm , it seems humans never learn to drop their unwanted  trash in the trashcans kept just for this purpose everywhere. I constantly find water bottles and paper bags wherever I go. Our lakes are dying not just because of the heat, but because of our carelessness of humans and their terrible habits. They are becoming rubbish heaps.