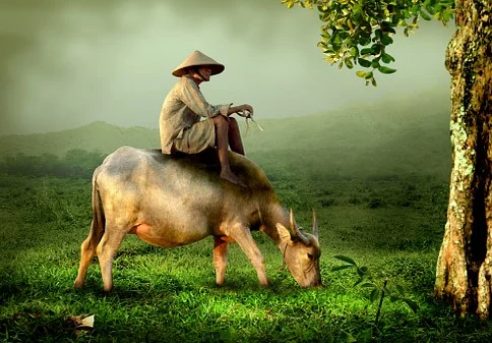 “There  is no defense against adverse fortune which is so effectual as a habitual sense of humor.” ~ Thomas W Hugginson

People throughout the ages have done some crazy things for money and have used many crazy things as money. Stones, Cows, and gold coins that weighed as much as 200 pounds have all served as currency. Naturally, as soon as an alternative form of money comes into circulation, a new form of criminal will begin trying to knock it off (with the exception of cows; I could not find one historical reference of criminals attempting to pass off fake cows as money).

The Bottom Line: For hundreds of years, money has made the world go round and also made people go completely nuts.

COWS ARE THE OLDEST CURRENCY IN THE  WORLD.

Cows were domesticated in roughly 9000 BC and people began using them as collateral, and then almost immediately afterward, as currency. In fact, in parts of Africa, cows are still used as cash. A few years go, a South-African software developer created a firestorm when he developed an app to assess a woman’s LOBOLA or bride’s “dowry/price”,  as a combination of cash and cattle.

According to that app, a twenty-five-year-old woman with a job who considers herself to be “very beautiful” and has both children and a high school certificate could command a price of “$500 and no cows” on the marital market. After being (appropriately) perceived as offensive, sexist and degrading to women, the app was updated to also include a “groom’s price” as well, a classy move!