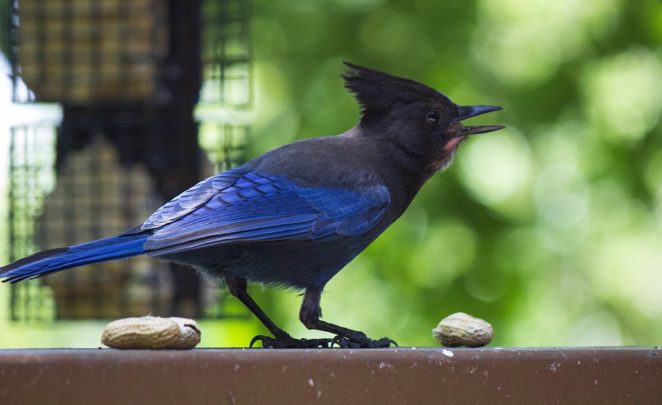 Steller’s jays are common in the mountains of the western US and they are year-round residents of Montana.

These are true jays and are not bluebirds, despite the coloration. They are sometimes called “blue jay” in the Pacific Northwest, however, they are not blue jays, either. Blue Jays are most common in the eastern part of the US. Stellar’s jays will readily breed with blue jays, though, so there is likely to be a large population of hybrids, where the ranges overlap.

This is a medium-sized bird, around a foot in length. They are deep blue and the head varies from being darker blue to black. They have a crest that they can raise and they often do so when they become excited. The dark head and erectile crest are distinguishing identifiers. The appearance is unlike any other bird in the US.

Steller’s jays are related to magpies and crows yet they are quite different. They are omnivorous and are also scavengers, earning them another nickname; “camprobbers”. (Incidentally, there is another bird named a camprobber that is quite different than Steller’s jays.) They commonly eat seeds, fruits, insects, eggs, and carrion. Occasionally, they will even eat small rodents or reptiles.

The bird is named after a German naturalist Georg Wilhelm Steller.

These jays usually have a loud, harsh call that isn’t particularly pleasant to listen to. They are also the bane of many hunters since they will often call out if they see someone moving carefully through the woods and will usually keep pace with the person, alerting other wildlife of where the person is. Interestingly, though, they aren’t especially shy around people. Many times they will enter a camper’s camp, hoping to find an easy morsel to eat, even if people are in the camp at the time.

As a boy at Crater Lake, I used to feed these birds as they would alight on my shoulder to accept a scrap of bread without hesitation.