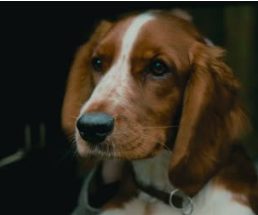 We don’t know what her name really was but our little Jack Russell dog, Bisto, had daily visits from this beautiful, mixed breed, mysterious dog, for about a year. Although she had a collar, it had no name tag or phone number. She would crawl through, underneath a small hole in the fence, run up our long driveway to a little knoll outside our back door, sit down and start yelping.

This was a clear sign that Bisto was being summoned to play. Like a bolt of lightning, he would dash through the rubber-flap in the door up the bank to where Angel was waiting for him. Next, they would check for rear-email. followed by a brisk run around the house and finishing up at Bisto’s Kibble bowl where like the proper little gentleman he was around her, he would sit quietly next to her watching her polish-off the entire bowl.

After her meal, Angel would lick his snout, the dash down the driveway, to burrow through the hole in the fence, while Bisto watched her disappear up the road. We tried to follow her to where she lived but we never got to find her owner.

One evening after 11 pm. Angel was sitting on her little hill yelping pitifully. I shouted for her to go home and after another minute or so, she ran off. This strange behavior carried on for about three weeks. She would sit and cry, for a few moments, then run off, only to re-appear the next day, play with her buddy, eat, and leave. It was definitely her yelping every night after midnight as I went up to her every time, shooing her and telling her to go home…

One morning I was giving him a de-worming tablet when suddenly he yelped as if in pain. He just sat there whimpering while we frantically tried to get the vet whose practice was virtually next door. The phone was engaged so my wife picked him to carry him to the vet, while I  kept trying to get him on the phone.

As I got through to him, my wife was standing in the doorway, sobbing bitterly. I just knew we were too late because my little boy’s body had gone completely limp. When she got to me, I checked for a pulse or any other sign of life, rubbing his little chest, yes even CPR, but we were just too late…

Seconds later, Doctor Derek Swain was with Bisto, his prelim diagnosis revealed that our boy showed signs of poisoning! The deworming tablet was the correct dosage but, without an autopsy, he could not be sure. The bill would have run into hundreds of dollars and even with our strong evidence of incorrect dosage packaging and Derek Swain’s testimony, the case could take years and many dollars, which we just didn’t have, to take on “Big Pharma. So we had a little funeral for him, after wrapping his little body in his favorite blanket.

It was a week later, that my wife called me to the back door. I asked her what it was and she just kept telling me to come and see something. Nothing could have prepared me for what I saw as I got there! There was Angel, (we gave her the name because she brought so much happiness), lying on the doormat, surrounded by little brown, wriggly things. She had given birth to 7 healthy little pups! As we didn’t know who her owners were we called doctor Swain who took her and her pups to his practice. About six weeks later he was at our door with the prettiest little puppy if we wanted her. He had found Angel’s owners about a quarter mile up the road. They had offered her to us for taking her to the vet, if we wanted her. we named her “Anana” the Inuit name for (beautiful)