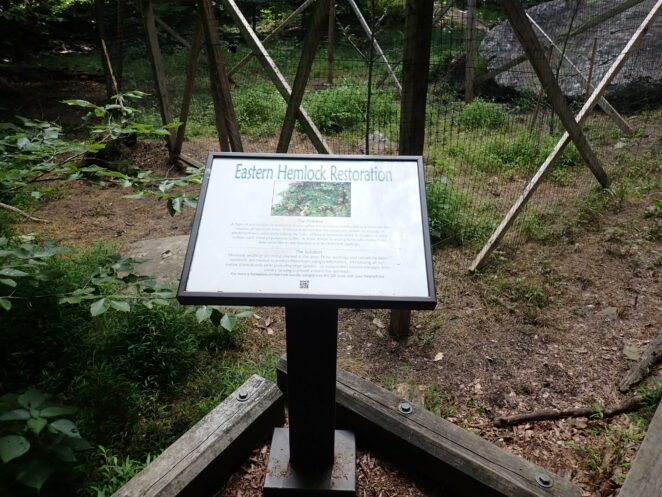 Yesterday was Day Trip 3 of vacation time! We (management) decided that we had to go to the Catoctin Mountains. At the same time, part of the Allegheny Moutain Rainge is around 1200 feet from sea level to peak. More, of what I would call a ridge, although the ridge was higher in the air than the hills of Indiana. Those, the hills of Indian ten to be around 400 or so feet above sea level. These are well above that.  We wanted to take the 1.4-mile walk from the Visitor Center of the National Park to the Cunningham Water Fall and then wander back!

No rough weather, but we did get lost on the way back. The falls, late in the summer and during a long dry period, weren’t very impressive. It did have some water and looked like a water fall, But you could understand that the falls are often a lot larger based on the stream bed. From the looks of the trees and rocks moved around, the falls were quite significant in the spring. The raised walkway we were on was about 5 feet above the ground. It had multiple posts and was designed to withstand a fairly large amount of water from the falls pushing towards the ravine!

So, never let a person who doesn’t pay attention to shapes be in charge! We followed the yellow square path from the Center to the falls. Then, we were to follow that back. But, sadly, I turned left when I should have turned right, and we ended up at Hog Rock. Does that matter? Well, the Square trail we came in on skirted the edge of the mountain. The Hog Trail went straight up the mountain. IT was nice to see the vistas, but sadly we were tired when we saw Hog Rock. Not, mind you, that Hog rock looked like any Hog I’ve ever had over to the house for dinner.

The 2-hour route became a 3-hour tour. A little harder walk than expected!