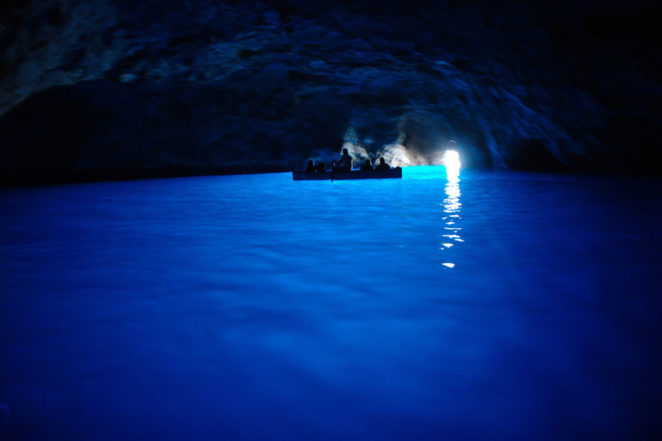 The Blue Grotto is an oval-shaped sea cave on the coast of the island of Capri, on the south side of Italy’s Bay of Naples. It takes its name from the fact that daylight enters the cave in such a way that the water absorbs all wavelengths except for blue. It has been described as entering a giant sapphire.

It can only be entered by boat through a tiny entrance, and only when conditions permit. Visitors must lie on the floor of a small boat which is taken into the grotto by the boatman pulling on a rope attached to the wall.

The grotto has been known about for thousands of years and was known to be a favourite place of the Roman Emperor Tiberius. The walls of the cave were adorned with statues of gods, some of which have been recovered from the seabed within the cave.

Needless to say, this is a popular tourist destination and long queues of boats form on fine days, which is the only time when access is possible.