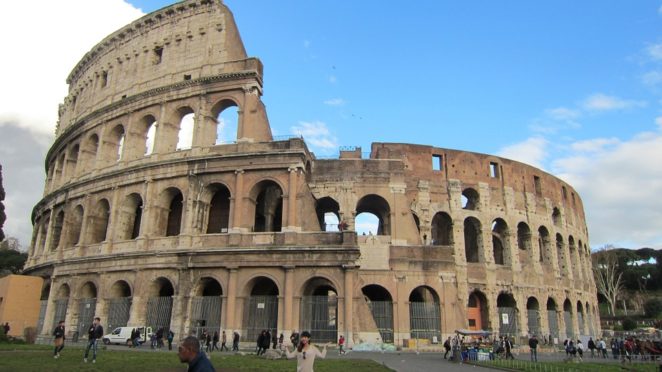 The Colosseum in Rome is one of the Ancient World’s most remarkable surviving landmarks, but it is obvious from even a cursory glance that it is not the same shape that it once was. It therefore poses two complementary questions, namely “how has so much of it survived?” and “why has so much of it disappeared?” It is quite an interesting story.

At the outset, the construction was engineered extremely well. It was built on the orders of Emperor Vespasian and completed by his son, Emperor Titus, to celebrate their military successes. The site was both practical and symbolic, this being where Emperor Nero built his “Golden House” on land cleared after the Great Fire of 64 AD. Nero sought only to glorify himself, but Vespasian and Titus wanted to give something back to the people, namely a place of entertainment and celebration.

Nero had included a large lake in the grounds of his palace, and the Colosseum was built where the lake had been. Given the boggy nature of the land, the foundations had to be particularly well constructed to take the weight of the massive walls of the superstructure, and these foundations were made from an early form of concrete that clearly did the job. The internal design of the building, with wedge-shaped segments interlocking to form an ellipse, also added to its strength.

The building, which covers an area of six acres (2.5 hectares), was opened in 80 AD and was able to accommodate up to 50,000 people at a time. At various times it was used for staged animal hunts, gladiatorial combats and public executions, although there is no evidence that any Christian was ever thrown to the lions, although this was one of the means of execution for common criminals.

The building continued to be used for public entertainment right through the imperial era, with the last recorded gladiatorial combat being in 404 AD and the final animal hunt in the year 523.

However, the Colosseum was subject to many setbacks during that time. Much of the building’s interior was made from wood, including the seating and the flooring that covered the basement area in which the animals were caged prior to their appearance in the arena. Fires were not uncommon, and repairs to the wooden structures were needed throughout the Roman period.

Lightning strikes and earthquakes also threatened the building. Damage caused by lightning in 217 was not repaired until 240, and further damage was caused by earthquakes in 442, 470 and 523.

By the 10th century the Colosseum had become a Christian cemetery, with some of the vaults and passages used as shops and houses. For a short time it became the private fortress of the Frangipani family.

The Colosseum is the shape it is today largely due a major earthquake in 1349 that brought down much of the masonry of the upper walls on the south side. The rubble was used for other buildings in the city and the marble facades were burnt to make quicklime.

By the 16th century the site was an embarrassing eyesore, and there were suggestions that it be completely demolished. However, this did not happen and other uses were found for it, including a venue for bullfights.

The Colosseum was saved for posterity thanks to a decision by Pope Benedict XIV in 1749. He was happy to take as fact stories of large-scale Christian martyrdom that may or may not have happened in the Colosseum, and declared that it was therefore a sacred site. There is little doubt that Christians did die in the arena, but the numbers have almost certainly been exaggerated. However, the recognition of even one martyrdom would be good enough as a reason to stop an ancient architectural treasure being destroyed if that is what it takes!

Once it was recognized as a place of pilgrimage, the Colosseum became the subject of preservation orders rather than continued decay. The fabric has been strengthened where necessary and further collapse should – it is hoped – have been prevented.