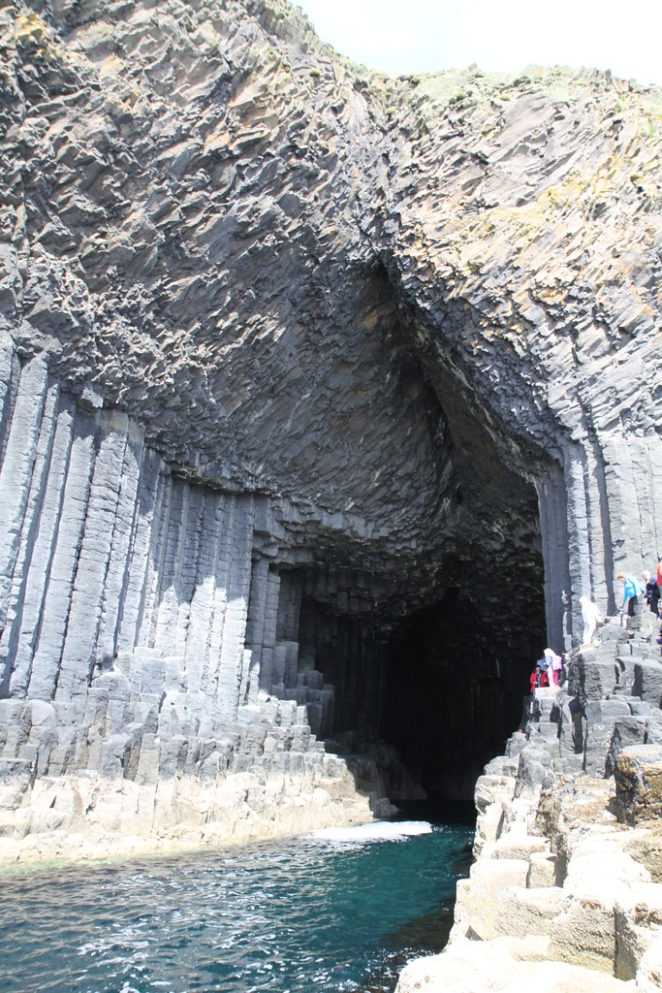 Staffa is a small island off the western coast of Mull, which is a much larger member of the Inner Hebrides of Scotland. The island, which has been uninhabited for centuries, is less than half a mile long and a quarter-mile wide.

There are two main reasons why people visit this island, which is completely devoid of roads or buildings. One is the wildlife, which includes colonies of puffins, fulmars and black-legged kittiwakes, as well as dolphins, grey seals and pilot whales offshore. The other is the geology.

Staffa is entirely the result of volcanic activity about 60 million years ago when vast sheets of lava poured across the region. In places, these cooled very slowly to form massive crystals of basalt that can be seen today as six-sided columns. A noted location is the Giant’s Causeway on the coast of Northern Ireland, and Staffa is another. Here, the columns are topped by a mass of non-columnar basalt that clearly cooled at a much faster rate and did not form crystals.

At the southern tip of Staffa is the feature for which the island is world-famous, namely Fingal’s Cave, where the basalt columns can be seen to best effect, punctured by a sea cave.

Over the centuries Fingal’s Cave has had many distinguished visitors, including Queen Victoria and the composer Felix Mendelssohn, for whom the cave was the inspiration for his “Hebrides Overture”.

Not surprisingly, there are legends about how the island came to be. One is that the giant Torquil MacLeod was on his way home from building the Giant’s Causeway when his sack burst open and some of the rocks he was carrying fell out. Another is that it was the work of Finn McCool, and that the Giant’s Causeway and Staffa are the two ends of the bridge he built so that he could cross over to Scotland to fight a rival giant.

Boat trips from neighbouring islands will take modern visitors past the entrance to Fingal’s Cave and land them at the only available jetty on the east side of the island, if weather conditions permit. From the jetty one can walk to a point close to the cave entrance.

The paths that cross the island are fully exposed to the prevailing winds and there is no shelter should the weather turn bad. The cliffs are generally sheer, so sticking to the paths is always to be advised, especially as this avoids disturbing the wildlife.

On a fine day, visitors are rewarded with splendid views towards the nearby islands, the Scottish mainland and out to sea.