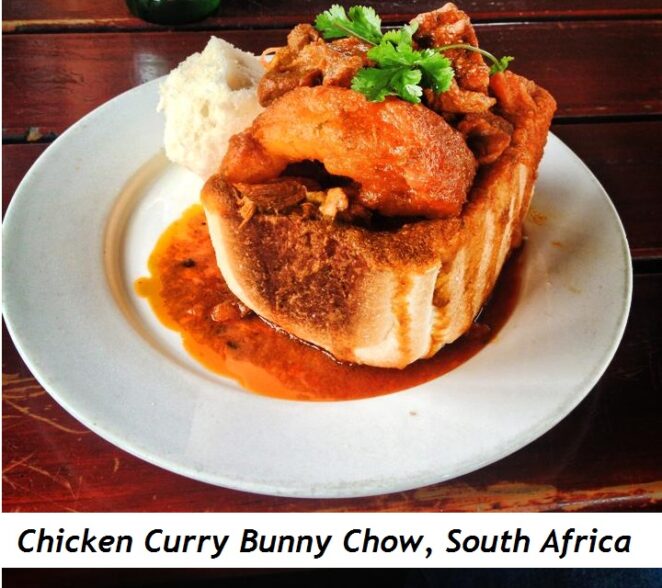 Planning a vacation is always a major decision (sometimes a major headache). But not for me, since I am a dream traveler.  My choice of where to travel for my imaginary vacation was made easy because I read a fascinating article in the Travel section of the New York Times (dated Oct 25, 2015).  The editors chose to shine the spotlight on the Durban community in South Africa.

Of course, wherever I travel, I want to learn the history and sample the food by finding recipes to cook in my own kitchen.

The Indians came to South Africa as indentured servants, hired by the British to work in the sugar cane fields, circa1860.  Even though they came with the hope of a better life, the history of their life in South Africa is not without hardship.  It’s ugly and complicated.  They did not escape the racial hatred and were also victims of racist attacks.  Yet they remained in South Africa, endured the difficulties and injustices, and today they are thriving and serve as high-ranking officials in the government of SouthAfrica.  Durban boasts one of the world’s largest Indian communities and they pride themselves on how well they have maintained their Indian culture.

That’s history, in a nutshell.  As for the food:

To voice the feelings of Indians in South Africa, Mahatma Gandhi started ‘Indian Opinion ‘ on 3rd June 1903 from Durban. It was a weekly, published in four languages – English, Gujarati, Tamil and Hindi, with Mansukhlal Nazar as unpaid editor. pic.twitter.com/ieg1qocfRH

Indian South Africans are citizens and residents of South Africa of Indian descent. The majority live in and around the city of Durban, making it the largest 'Indian' city with the highest population of Indians outside of India.#SouthAfrica #Postapartheid #Diwali pic.twitter.com/ZAWQR5dAMW

Durban is the perfect place to indulge in the unique Indian curry, with its roots in the food of the indentured Indians who arrived from 1860 to work on the sugar cane plantations via @ShotLeft by @IshayGovender https://t.co/5gMw9CUYXL | NN pic.twitter.com/Ns4yhRJXg3

This blistering-hot curry in a hollowed-out half- or quarter-loaf of white bread is one of South Africa's most beloved street foods!

The vegetable and meat curries were bought to SA by Indian sugar-cane laborers in the 19th century. pic.twitter.com/pCNbn7skFF

Ever heard of 'bunny chow'? Nothing to do with rabbits – it's a dish from South Africa. Started in Durban by the migrant Indian cane cutters, it's half a loaf of bread filled with delicious curry. It's amazing! https://t.co/EdHo71zdIV#MeetSouthAfrica pic.twitter.com/VE7FXTdN73

Bunny Chow was firstly made by Indians who were in SA for sugarcane plantations.Making Indian breads was time consuming, so putting curry in hollowed out loaf of bread was a convenient way to carry food in fields.

The name comes from ‘bun’ & ‘achar’ or Baniya community in Durban pic.twitter.com/6TfyXwblDF