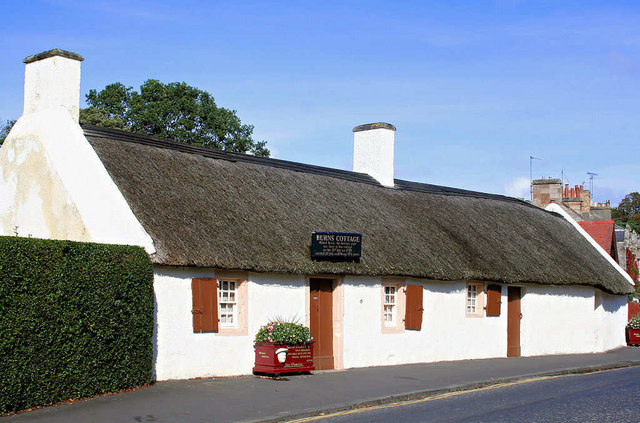 Robert Burns was undoubtedly the greatest poet that Scotland ever produced. He wrote many memorable works in his native lowland Scots dialect, including “Auld Land Syne” that is sung throughout the world as each New Year begins.

He was born on 25th January 1759 in a modest three-room thatched cottage in Alloway, Ayrshire. His father, a gardener, had built it himself two years previously. However, Robert was the first of seven children and as the family grew the cottage clearly became impractical as a family home.They therefore moved away when Robert was only seven years old.

The cottage was owned by many other people throughout the years, and was at one time a village pub. However, the association with Robert Burns became known as his fame spread and visitors from far and wide came to see the place where Scotland’s National poet had started his life.

Robert Burns was only 37 years old when he died in on 21stJuly 1796. On the fifth anniversary of his death a group of friends met at the cottage to celebrate his life by holding a supper in his honour. The tradition of an annual “Burns Supper” has been maintained ever since, although the date has been moved to that of the poet’s birth, namely 25th January. Burns Suppers are held throughout Scotland and in many other parts of the world.

The cottage has been fully restored and is now under the guardianship of the Robert Burns Birthplace Museum and the National Trust for Scotland. The presentation of the cottage’s interior was been done as authentically as possible, so that the visitor can see where young Robert Burns would have ate, slept, and had his first lessons in reading and writing from his father.

Visitors will be able to appreciate the humble background from which he came, as well as enjoying some of his poems displayed on the walls and presented in audio form.

As well as exploring the cottage, visitors to Alloway can immerse themselves in “Burnsiana” by following the path to the main Museum, walking across the Brig o’Doon and visiting ruined Alloway Auld Kirk, both of which feature in his poem Tam O’Shanter.

(Brig o`Doon, across which Tam was chased by the witches)