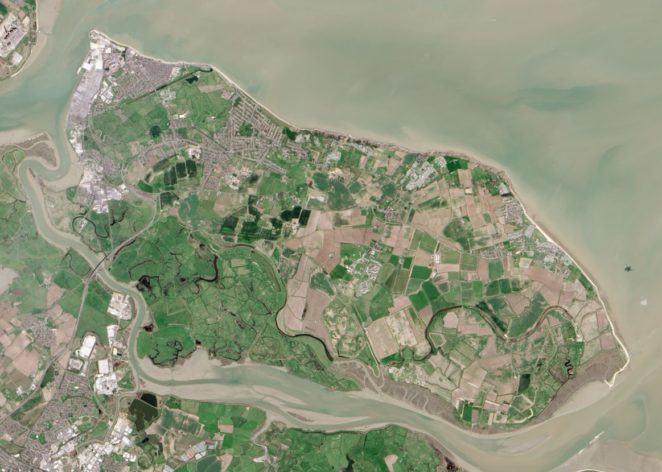 The Isle of Sheppey is an area of North Kent that is separated from the mainland by a narrow inlet of the sea known as The Swale. The chief settlement is the town of Sheerness, but much of its 36 square miles consists of farmland and salt marsh. The land is almost entirely flat, which, together with its easy access to London, is why it became an important place in the history of British aviation.

Horace, Eustace and Oswald Short were brothers who, in 1897, had started a business manufacturing and selling gas-filled balloons. In 1908 they expanded their business by gaining a licence from the American Wright Brothers (Orville and Wilbur) to build aircraft. This was not possible at their factory in London, hence the move to Sheppey. They built the world’s first aircraft factory at Shellness Beach, at the eastern end of the island, near Leysdown. The headquarters of the company was at Mussel Manor, a 16th-century house that has since been renamed Muswell Manor.

On 2nd May 1909 John Brabazon made the first flight in Britain when he flew his Voisin biplane aircraft – which he kept in the Shorts’ factory hangar – for 500 yards at a height of 35 feet. As the first Englishman to fly, he was granted Pilot’s Licence number 1.

The Wright Brothers visited the factory two days after Brabazon’s flight. They were driven down from London in the first Rolls-Royce Silver Ghost, their chauffeur being C S Rolls. Rolls had ordered the first Shorts’ plane to emerge from the factory, which was Shorts Number 1. John Brabazon was the customer for Shorts Number 2, and he flew it on 30th October in a circular two-mile course, at a height of 20 feet.

(statue of the Short Brothers at Muswell Manor)

The early successes of the Shorts Brothers were well timed, because international tensions meant that there was a ready market for innovative new weapons. Shorts were quick to exploit these opportunities and were soon designing and building seaplanes for the Royal Navy. In 1912, at Sheerness, a Shorts seaplane became the first in the world to take off from a warship. After World War One broke out Shorts planes were soon on active service, and in 1915 a Shorts seaplane became the first aircraft to sink an enemy ship at sea using a torpedo.

C S Rolls and John (later Lord) Brabazon had very different flying careers. Rolls was killed in a flying accident in 1910, but Brabazon carried out a number of aviation feats, including flying through London’s Tower Bridge, and he served with distinction in the Royal Flying Corps (which became the Royal Air Force) throughout World War One. He later became a Member of Parliament and a Government Minister.

It is possible to visit Muswell Manor and see a photograph that was taken during the visit of the Wright Brothers in 1909. The photograph, entitled “The Founding Fathers of Aviation” is of the Wright and Short Brothers plus Rolls and Brabazon.