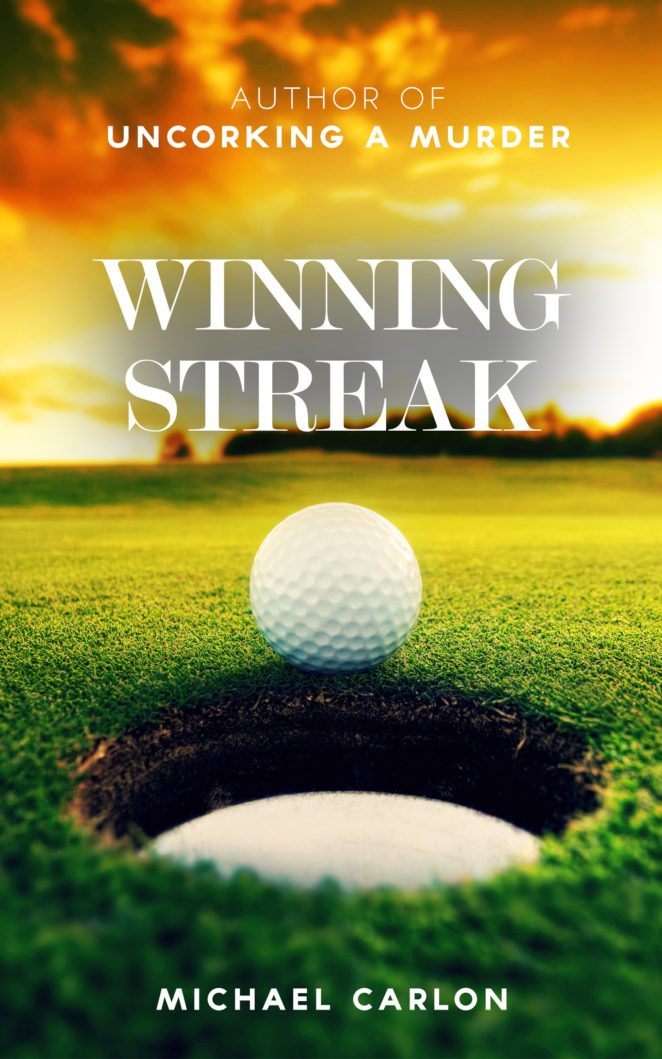 The renowned author of Uncorking a Murder, the extremely versatile Michael Carlon, has now written a book centering on the golfing world, peopled with an array of characters that are exceptionally well drawn, with the three leading protagonists being Patrick “Trick” Evans, the only pro to win all four of golf’s major championships in the same calendar year, Casper Quinlan, a keen blogger who is intent on digitizing her publisher father’s Fore! Magazine to make it a roaring success in the 21st century, and Robert McCullen, who is grieving his wife’s death from cancer. How these three individuals meet and come to have their lives intertwined forms the backbone of this story.

With marked resemblance to the writings of Mitch Albom, Winning Streak (Michael Carlon; ISBN: 978-0-9979839-1-3) has an emotional pull that enhances and deepens the even-toned development of the plot. The vulnerabilities of especially the lead characters are exposed at every turn, encouraging the readers to side with them against all obstacles that lie in their way. How they triumph over seemingly invincible odds is inspirational and profoundly moving. Clearly, Carlon has had to encounter many difficulties in his own life in order to be able to write like this. Small wonder that he hosts the Uncorking a Story podcast, which features in-depth interviews with fellow authors, as well as with ordinary people doing extraordinary things to transform society into a realm of interlinked beings that really care about one another in a deep and meaningful way.

The well-roundedness of Winning Streak comes partly from Carlon’s balanced acknowledgement that, despite the golfing world being of great interest to some, others regard the sport with scant respect, regarding the game as a waste of a good walk. In fact, walking and savoring the moment are two foci of the narrative that very much account for the comparatively slow pace of the text. Carlon, in a near-Buddhistic sense, clearly believes in being present in the moment. The immediacy of the pain and joy of his characters is all the more real and accessible due to the author’s intimate knowledge of the human psyche.

Apart from the fascinating insights that Winning Streak provides into the professional golfing circuit, there are deep notes of musicality that resonate throughout the text. An appreciation of music underlies the essential tempo of the work, with the lack of the physical presence of the deceased Madeline McMullen being far outweighed by her spiritual omnipresence as a major motivator of the movement that takes place in the book. The clarion call of the town of Chatham, Massachusetts, serves as a magnet to the lead characters, who are drawn there as though by an unseen force. Just as they are pulled towards the epicenter of this introspective microcosm, so, too, is the reader hypnotically compelled to face the central issues of loss and redemption in Winning Streak, which is so much more than a mere sports romance, with it, rather, being a sound reflection of the human spirit, in all its heartfelt subtleties and nuances.