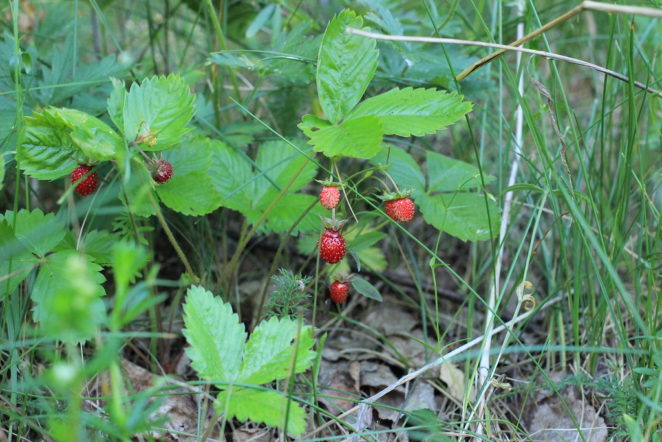 Wild strawberry (Fragaria vesca) is the plant from which the much-loved domestic strawberry was cultivated in the 18th century. The so-called Alpine strawberry, which has smaller fruits than those of garden strawberries, is closer to the original wild form.

True wild strawberries grow in Great Britain in woods and on grassland, especially on chalky soil. Some plants that are found growing wild are actually descended from cultivated plants the seeds of which “escaped”.

The name strawberry has nothing to do with any notion of straw being used to provide a bed for the berries and protect them from slug damage. The name goes back to Anglo-Saxon times – before the year 1000 – which was long before the plants were cultivated. In the Anglo-Saxon form of English, one meaning of the word straw referred to small particles of chaff, which could be taken to indicate the scattering of pips on the surface of the fruit. Another meaning is to strew across the ground, which is what the plant does with its creepers.

The upper leaves of the wild strawberry have long stalks and three leaflets that are bright green on top and pale underneath. The lower leaves form a rosette. The plant can grow to anything between 2 and 12 inches in height (5-30 cms).

Flowering is from April to July. The fleshy fruit, which turns red when ripe, is known as an achene. This is equivalent to the central part of a raspberry, to which the seed-containing fruits are attached, but in the case of the strawberry the seeds are on the outside of the fruiting body and not contained within.