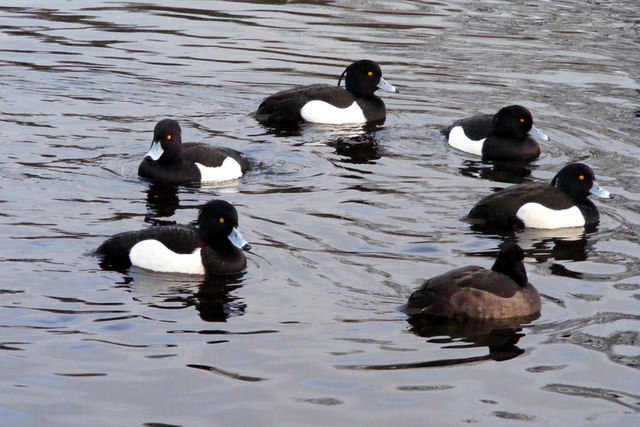 The tufted duck (Aythya fuligula) is a partial migrant that is found throughout northern Europe apart from southern Norway. It is also found across Asia as far as Japan. In the United Kingdom it breeds in lowland England, Scotland and Ireland but is rarer in Wales.

The tufted duck is a diving duck that frequents all kinds of inland water but not often seen on the sea.

Tufted ducks measure up to 430 mm (17 inches) in length. Males are mainly black with a white belly, flanks and wing bar. The tuft of the name is a drooping black crest.

They have yellow eyes, grey-blue legs and bill.

The plumage of females, juveniles and males in eclipse is mainly brown with a pale belly and white wing bar.

Tufted ducks are highly gregarious and often mix with other ducks and coots.

Female tufted ducks make a growling “kurr” noise and males have a soft whistle in the breeding season.

Tufted ducks feed on pondweed, sedges, and a variety of non-plant food including freshwater mussels, shrimps and insect larvae. They gather most of their food by diving to the bottom of their lake or river, but will sometimes up-end to take food from near the surface.

Males and females form pairs in late winter or early spring and begin nesting in May. The nest is a feather-lined hollow near water where there is plenty of cover, such as in a tussock or under a bush. The clutch is usually between 8 and 11 eggs which are incubated by the female. Male tufted ducks often leave the area at this time.

The ducklings can feed themselves soon after hatching and fledge at around 45 days. The female may also have left before fledging takes place.

(The photo is not mine, but taken from a copyright-free source)