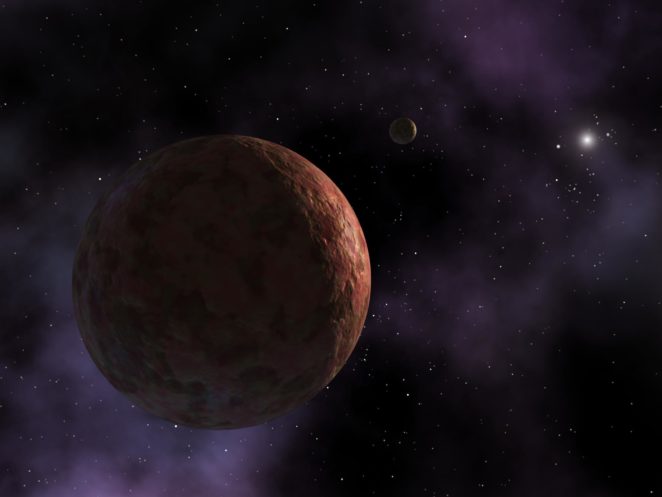 Sedna is the most distant known object in the solar system, so it is hardly surprising that relatively little is known about it. It could be about 1,000 kilometres in diameter, which makes it a dwarf planet that is smaller than Pluto’s moon Charon.

Sedna was discovered in 2003, when it was around 75 astronomical units (AUs) from the Sun. An AU is the average distance from the Sun to Earth, and Neptune – the most distant planet – is 30 AUs from the Sun.

Unlike the recognised planets, Sedna has a highly elliptical orbit, and it was close to its perihelion (the closest point) at the time of its discovery. By 2015 it was at 86 AUs, and when it reaches its aphelion(furthest point) it will be 937 AUs away, or 31 times further away than Neptune! This will, however, take quite a long time given that Sedna takes 11,400 years to complete a full orbit.

(From Sedna, the Sun would merely be the brightest star in the sky)

Sedna is therefore classified as an object belonging to the Oort Cloud, which is a vast ball of mainly small objects that envelops the entire solar system at distances possibly as great as 200,000 AUs and is the storehouse of long-period comets that sometimes visit the inner Solar System.However, Sedna’s aphelion only takes it to the inner edge of the Oort Cloud as it is generally understood, and it is thought that it may therefore belong to an “inner Oort Cloud” that forms a disc just inside the Oort Cloud proper.

Although Sedna’s orbit resembles that of a comet in some respects it never gets remotely close to the Sun and so will therefore never turn into a comet with its characteristic tail.

Spectral analysis of the available images of Sedna have revealed that the surface contains frozen water, methane and nitrogen. It has also been detected as the reddest object in the solar system, this being due to the presence of tholins, which are organic compounds that have been subjected to ultraviolet radiation. These are common on objects at the outer margins of the known solar system.

Sedna may hold the record for “most distant dwarf planet” at present but this cannot be guaranteed for ever. Who knows how many other “Sednas” there might be out there, but which have yet to venture close enough to us to be spotted?