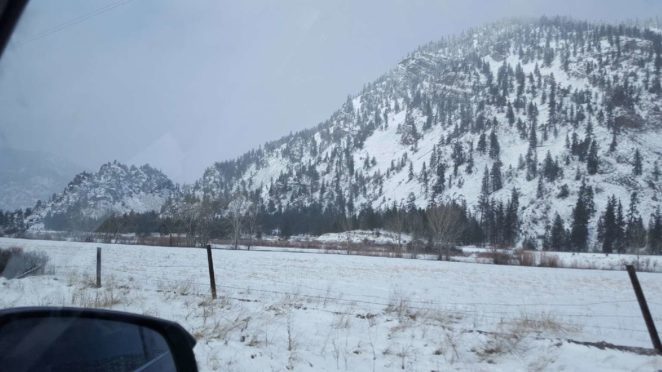 In previous articles, I’ve explained the difference between weather and climate, mentioning how so many people make the mistake of using the two terms as if they are the same. They often don’t even realize that they are doing it. I’ve also explained what ‘climate change’ actually means and that it is definitely not what many people mean when they use the term.

One thing that is common to hear among non-scientists is how the earth is warming up catastrophically. Although many scientists have refuted this, it is somewhat simpler to show it. The graphs that follow were borrowed from a man named Charles Tips, who was the science editor for a major US university.

A question that is often glossed over, partly by picking certain data and ignoring other data, is how fast the Earth is warming up and why so many scientists still feel that we are ready for another glacial period. Here is a graph of the global temperatures over the past 450,000 years.

In each case, there was a rapid increase in temperature at the end of the glaciation. We are currently in one of those periods of inter-glaciation. However, if you look at the high temperatures at the end of every glaciation, you might notice something quite interesting. In all but the current inter-glacial period, the temperatures were substantially hotter than they are today. In fact, the previous three such periods were much hotter, to the point that our current temperatures are barely a blip.

We can look farther back than just 450,000 years, too, and the results are even more staggering. Here are the global temperatures over the past 500 million years.

Here is a graph that people sometimes use when they try to convince people that the earth is warming up catastrophically. 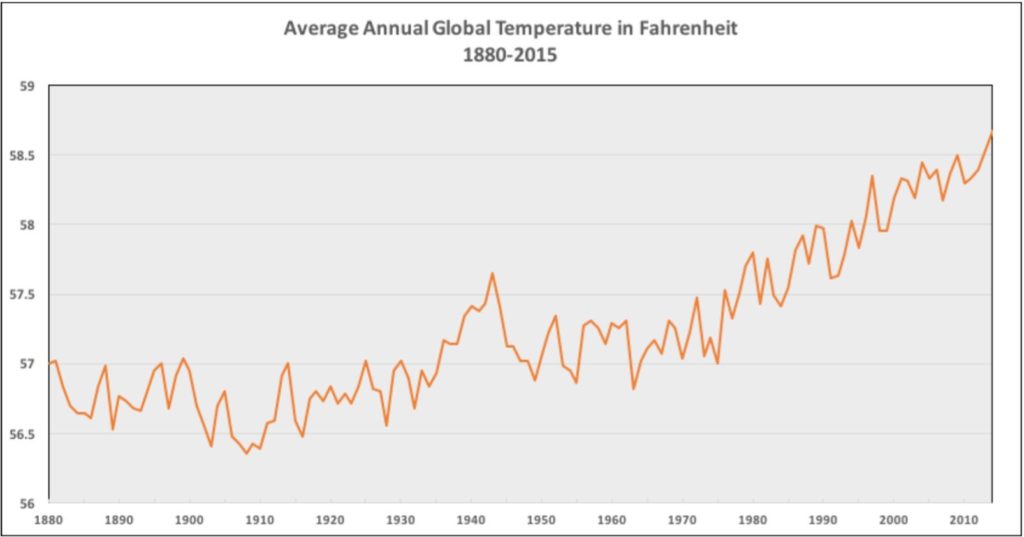 This is the period from 1880 to 2015. What they don’t mention is that this is a very narrow graph that doesn’t include most of the inhabitable Earth. It is also shown in Fahrenheit degrees, to make it seem like there is a greater fluctuation. The other graphs already show that there is no catastrophic increase in global temperatures, but even over the last 135 years, the above graph is inaccurate. Here is what happens if we include all surface temperature readings, in other words looking at it more broadly, over the same 135 years. 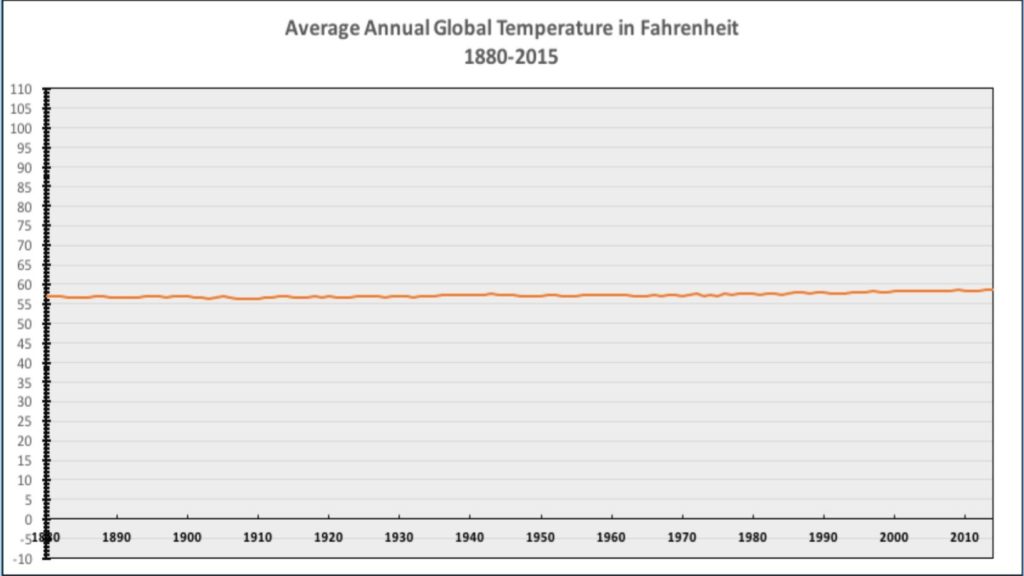 The line isn’t straight, but it is close to it. It does show an increase in global temperatures over the last 135 years of about 2 degrees Fahrenheit. It needs to be remembered that 2 degrees F is a lot smaller than 2 degrees C. It is far cooler than the 14 C higher temperature of about 490 million years ago.

One final point that should be made. Carbon Dioxide has been labeled as the culprit that is causing catastrophic global warming. There indeed has been a slight increase in the CO2 in our atmosphere in the past couple of centuries and depending on the source, it is stated that the amount of CO2 in the atmosphere is between 340 and 400 parts per million. However, best estimates of the amount of CO2 in the atmosphere during the coldest of the Silurian ice age have been figured out to be about 3,000 parts per million, nearly 10 times more than currently. They stayed at around 3,000 parts per million for approximately 30 million years.

There is no doubt at all that mankind is a major polluter of all sorts of pollution. However, we don’t even have the capability of increasing the CO2 level ten-fold. It also should be pointed out that this level was during an ice age. If CO2 caused catastrophic global warming, it would be an impossibility for this to happen in the middle of an ice age. According to popular thought, that much CO2 in our atmosphere should have coincided with a time when temperatures were many times hotter than the world has ever had since it has supported life.

None of this actually supports or denies either theory; global warming or global cooling. However, it does show that the common thought regarding climate change is very far from accurate.

A very old saying went, “If you tell someone something enough times, they will believe it, regardless if it is true or not.” That appears to be the case when it comes to climate and climate change.