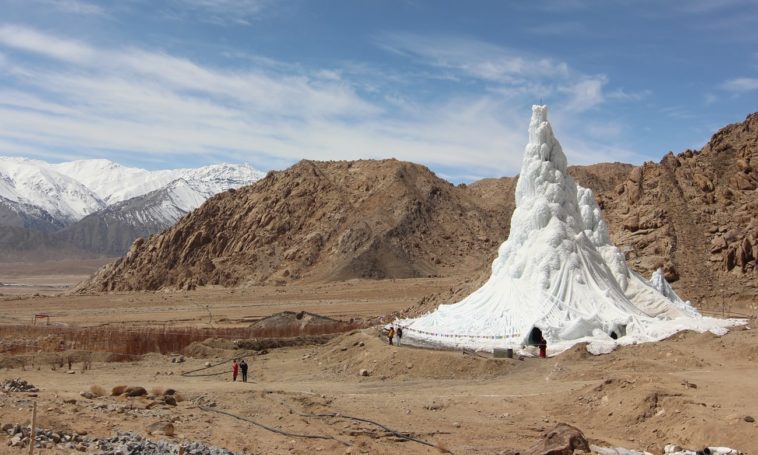 Ladakh in the northern region of India and in the state of Jammu and Kashmir is a cold-desert like a terrain. Many villages in the Ladakh are very isolated and it takes as many as two days for the villagers to reach the town. With such isolation comes a certain level of unfortunate negligence from the government and this is one such story where a man seized the opportunity to shine and be of help to his people when the government couldn’t or rather wouldn’t.

Climate change in this region has shrunk glaciers and rendered temperatures and rainfall unpredictable. The region which was before reliant on the water coming from melting glacial during the spring suddenly saw a change in this cycle. The stream from higher up was veins of the civilization but it was smothered with unexpected climate change. Sonam Wangchuck, a person who some suggest, inspired the character of Phunsukh Wangdu in the Bollywood hit ‘3 Idiots’, came to the rescue of the people with an idea which also caught global attention.

His idea was crowd-funded from within the village which has now helped them turn a supposed desert into a potential farmland. To save the land cultivated from turning barren – he being an engineer invented a technique which Buddhist aficionados would call an aesthetic way to connecting people spiritually to their purpose. He piped up the mountain streams which stretches quite a length before going vertical with aid of some sort of structure which then sprays out water at great heights. Since this is done in winter, the water freezes even before it could reach the ground and artificial glacial are created in the shape of stupas (A Buddhist place of meditation). While this gives it a religious touch – Wangchuk was clearly interested in the science behind it. With a vertical structure, the overall surface area in contact with direct sunlight, which Wangchuck believed was the major reason for melting of glacial would be minimum, unlike the natural glacial which melt off quickly given their flatter dimensions and therefore greater contact area.

With the first sun of spring, the stupa starts melting and provides the water the locals need. Now, that the 64-foot long ice stupa which was first created is tested for its sustainability, Wangchuck is planning to build more of these Ice stupas.