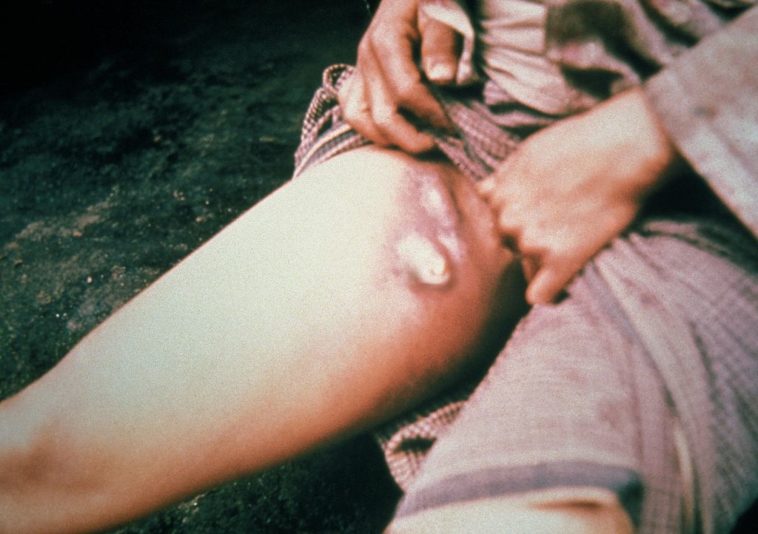 A Victim of the Bubonic Plague (Photo courtesy of Wikipedia)

A friend of mine shared a report on his Facebook page from Iris Madagascar, a mission outreach of a Christian organization to that island. The post was from the group’s Facebook account and mentioned that a teenage girl had just tested positive for bubonic plague.

Bubonic plague is one of three types of infections which can result from contact with a bacteria known as Yersinia pestis. It is believed to be responsible for the Black Death which killed many people in Europe during the period from 1346 through 1353. Estimates for the number of dead vary between 75 and 200 million.

The symptoms are similar to the flu. Within a week after contact with the bacteria, the victim will experience fever, headaches and vomiting. The lymph nodes closest to the infection site become swollen and painful. They may break open.

No useful vaccine has been found for the disease but several antibiotics (streptomycin, gentamicin, and doxycycline) have reduced the mortality rate from as high as 90% to 10%. The faster the victim gets the antibiotics, the better the chance of survival.

The plague was one of the earliest instances of biological warfare. Armies would catapult the corpses of the infected over the walls of towns and villages. The Japanese weaponized the bacteria during the Second Sino-Japanese War (1937-1945).

The plague is not being ignored. On 06 Oct 2017 the United nations World Health Organization (WHO) shipped 1.2 million doses of antibiotics to Madagascar. The Red Cross is also getting involved. However, Madagascar is not alone.

The plague travels on bacteria-infested fleas who bite their victims passing the infection along. The fleas, in turn travel on other animals, usually rats. However, in June of 2017 the bacteria was found in fleas on Prairie Dogs in New Mexico. So, if you think you are safe because you live in a first-world country, you are deluding yourself.

To find out more about Iris Madagascar, click here. I have no connection with this organization.