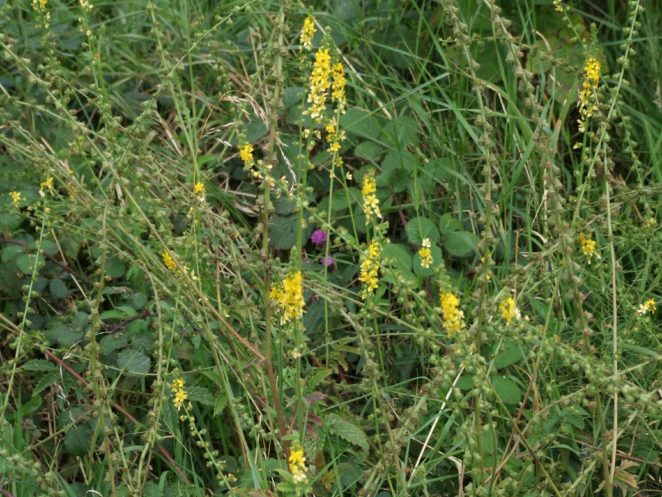 Agrimony (Agrimonia eupatoria) may sound like some sort of disease but is in fact a common wildflower that grows over most of Great Britain, being found in field margins, hedgerows and on roadsides.

In ancient times this plant was widely used for medicinal purposes, being thought to be a remedy for liver complaints, poor eyesight, memory loss and even snakebite!

The plant was formerly thought to have magical qualities in southwest England, being known as fairy’s wand or fairy’s rod. To counter this trend, the Church renamed it Aaron’s rod.

Another former use of agrimony was as a dye plant for wool, with a strong yellow colour being produced.

The stems of agrimony, which are upright, unbranched and hairy, grow to between 12 and 24 inches high (30-60 cms).

The plant flowers between June and August, producing spikes that bear numerous yellow star-shaped flowers with notched petals. These flowers, which have a scent reminiscent of apricots, attract bees and flies.

The fruits have a ring of hooks around the upper edge that are caught by passing animals which therefore help to distribute the seeds.

(The photo is not by me, but was taken from a copyright-free source)