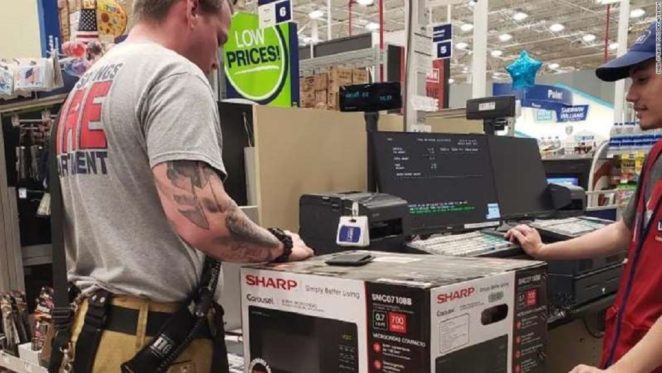 Doug Hope who is a firefighter in High Springs Florida was called to duty to examine a possible fire when an elderly lady who lives by herself was using a microwave oven that alerted the Life Alert system inside her home when she was cooking a cold meal that she purchased from Meals On Wheels.

Doug when he found out what the cause of the Life Alert alarm system was due to the elderly lady having to cook her meals from an old microwave that would have the Life Alert system ring up many more alerts In the near future.

Doug decided to go to a local Lowe’s hardware store and purchase out of his own pocket a brand new microwave for the elderly lady who lives by herself. Doug returned to the home of the elderly lady and took on the task of going the extra mile to not only install the new microwave oven and cooking his customer a meal for her enjoyment.

Even though Doug has less than one year of experience working with the High Springs Fire Department, his boss Lt. Kimberly Wilson has gone on record stating that Doug is an employee who truly cares for the people that he serves in his many years of being a firefighter around the nation.

Doug is one person who does live up to his last name Hope.