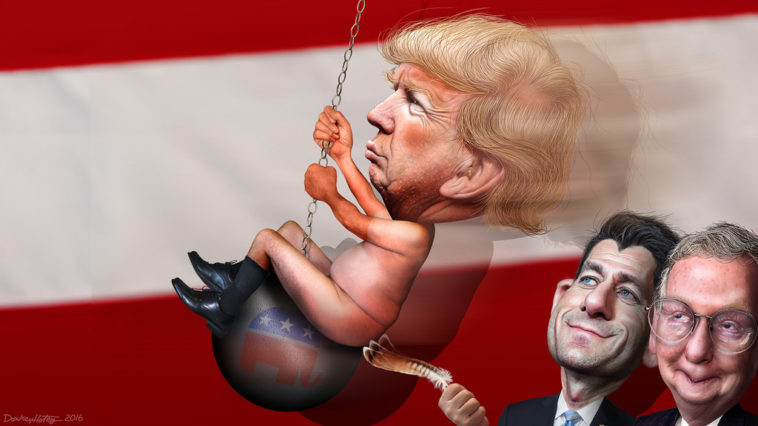 Those who would challenge the assertion that the ultra-rich are the source of the greatest power in America can be expected almost immediately to raise issues related to how the three different branches of government operate independently of each other. As noted over and over again, the Constitution was constructed with built-in limitations to abuse by one individual through the concept of the “separation of powers.”  So ingrained is the acceptance of these principles as a guaranteed protection against abuse of power that every American immediately understands the concept of checks and balances. The independence of the legislative, judicial and executives branches is based upon the theoretical assumption that this separation of their powers serves to effectively offset the potential for significant influence in legislating, adjudicating and executing the laws of the land by an tiny minority to further their own limited ends.

The administration of Donald Trump is certainly not the first nor only one to illuminate how shoddily constructed this theory actually is, but it most assuredly has managed to reveal the full extent of the weakness of the concept in record rime. Yes, the three branches of government enjoy an autonomy which allows them to keep in check an overextension of the reach for power of any other individual branch. When each of those branches is under the full control of one political party, however, the reality is that there is no checks and balances on the overreach of power by the party in control.  As Bill Moyers astutely observes, “separation of powers in a monoparty system is an absurdity because party and power supersede everything else, especially the public good.” His term “monoparty” is a reference to just how much the political aspect of power has changed since the foundation of America and serves to send a warning shot across the bow of the country with its recognition that the separation of powers and checks and balances designed to keep democracy from lapsing back into aristocracy are utterly depended upon laws “embedded in the Constitution [that] cannot be repaired without wholesale change.” The dire outlook from Moyers is based upon an assumption that the social fabric which for almost 250 years kept too much wealth in the hands of too few people from corruption the very foundation of American democracy can no longer be depended upon as a barrier.

The economic and political dimensions of power in a country are always interconnected to its social aspect and in the movement toward a system of governance that does not put America First, but Party First, it is the Party’s interest that will determine how economic power impacts the social construction of a society. In the hands of a nationalist, anti-democratic ideology that forms the basis of the Republican platform which is now in control of all three branches of government, the movement away from a progressive agenda seeking inclusiveness is clear. Standing in opposition to the Republican Party’s allegiance to its super-rich puppetmasters is not the Islamic model or the North Korean model or even the Mexican model, but the Swedish Model that is constructed upon an ideological understanding that capitalism is utilized to create more equality rather than less.

American democracy is today facing its greatest threat and it is not a threat from a madman in another country or from an anti-democratic ideology sweeping across the globe. The influence that the wealthiest citizens have upon elected representatives has become so vile and far-reaching that it has actually managed to corrupt the element that has long been esteemed as one of American democracy’s greatest and achievements: the system of check and balances inherent in the separation of power. Under the influence of rich donors whose primary purpose has become to ensure those representatives whose votes they have bought are re-elected so as to stay in power, the entire social culture that produces those politicians and disseminates their lies that help keep their rich overlords enjoying tremendous profits has become so poisoned beyond recognition that the Party First mentality has now created a situation where twice in just the sixteen years the winner of a Presidential election was the person who did not get the most votes! The American version firmly in the grasp of the rich who have the resources to manipulate truth is the only democratic government in the history of the world where the person with the second greatest number of votes is declared a democratically elected leader. Dead monarchs looking down from heaven and up from hell must be sharing a huge laugh at American’s expense at that one.