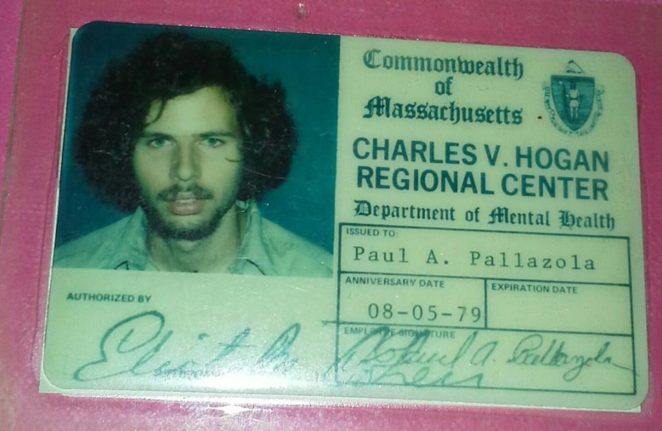 After a month of working as a CETA Summer Youth Program Employee at the Hogan Regional Center I was hired to work full time as as a Mental Health Assistant there. I started my two week orientation on Monday August 6th. From 9 A.M to 3 P.M we had in service trainings from the various departments & courses on First Aid, CPR, & Human Rights. From 3 to 5 P.M we were assigned to observe at the Unit we would be working on, which in my case was a ward with 21 adult men. I was given an “811” key so I could enter and leave the unit. In those days all the wards were locked & a regular census taken to make sure no one living there was lost. On… my fourth afternoon of orientation I was observing in the “Day Room” – a huge gym like room that had virtually no equipment. It was really hot thst day and some of the men who lived there would lie on the floor in an effort to cool off. The rest would wander around the room in circles until they were called to dinner. There was one guy there who had no sweat glands. I felt particularly sorry for him in this weather-he would wander around panting and get progressively more agitated. Around 4:30 that afternoon he started to bang his head repeatedly against the dayroom wall. I was puzzled as to why no one had tried to stop him. After a couple of minutes my interior dialogue had turned to a loud “WTF?” and I rushed over to him shouting “Hey!” I reached over to hold his arms.saying “C’mon you don’t want to do that to yourself man”. He screamed and bit me on my right arm three inches below the shoulder. I earned a tetanus shot, a lecture from a coworker on the importance of always being behind or at least beside someone requiring restraint, and a criss-cross scar that would stay with me for the next 30 years.