Cast iron frying pans and Dutch ovens tend to be very heavy, but they have advantages when it comes to cooking. They heat evenly and well and if they are properly cared for, cast iron cookware should last for decades. It isn’t uncommon for the cast iron pots and pans to be passed down from one generation to the next for several generations.

A large part of the care for the pots and pans has to do with keeping them seasoned. If cast iron isn’t seasoned, it is prone to rust, which can eventually ruin the cookware. It isn’t difficult to season the pot or pan and it also isn’t hard to know when it needs to be done.

It should be mentioned that when we speak of ‘seasoning’ cast iron, we aren’t talking about getting out the spices. Seasoning is simply the process of sealing the cast iron to prevent moisture from getting to the iron. Rust is formed when moisture and oxygen react with the iron. 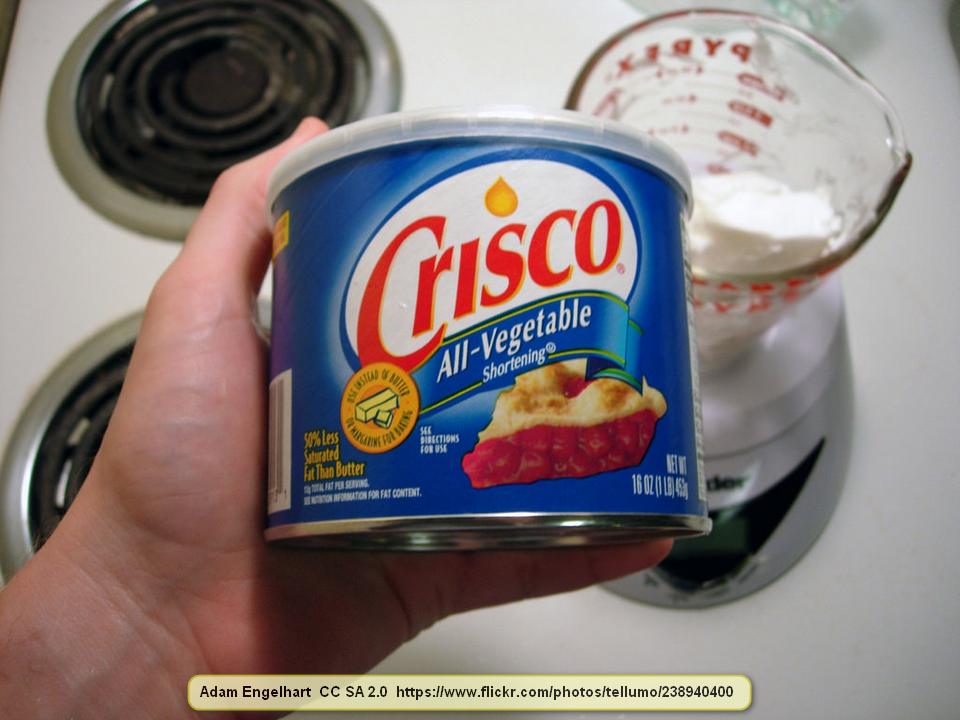 To season the pan, first wash the pan with hot, soapy water and rinse it with hot water. Immediately dry the pan with a clean, dry towel. If the pan has wooden handles, remove these. If there is a lid of cast iron, such as the lid for a Dutch oven, don’t forget to do the same thing with the lid.

Put the pan upside down into the oven. It is a good idea to put some aluminum foil on the rack below the pan, to catch the drips of shortening or oil. It will drip, which is the reason for putting the pan upside down. If you don’t, the oils will pool in the bottom of the pan. Cast iron lids are done in the same way, except that they are seasoned right side up, for the same reason.

Bake the pan for an hour at 350 F, then allow it to completely cool. Wipe the pan (and lid) down with paper towels to blot up any residual oil, if there is any. 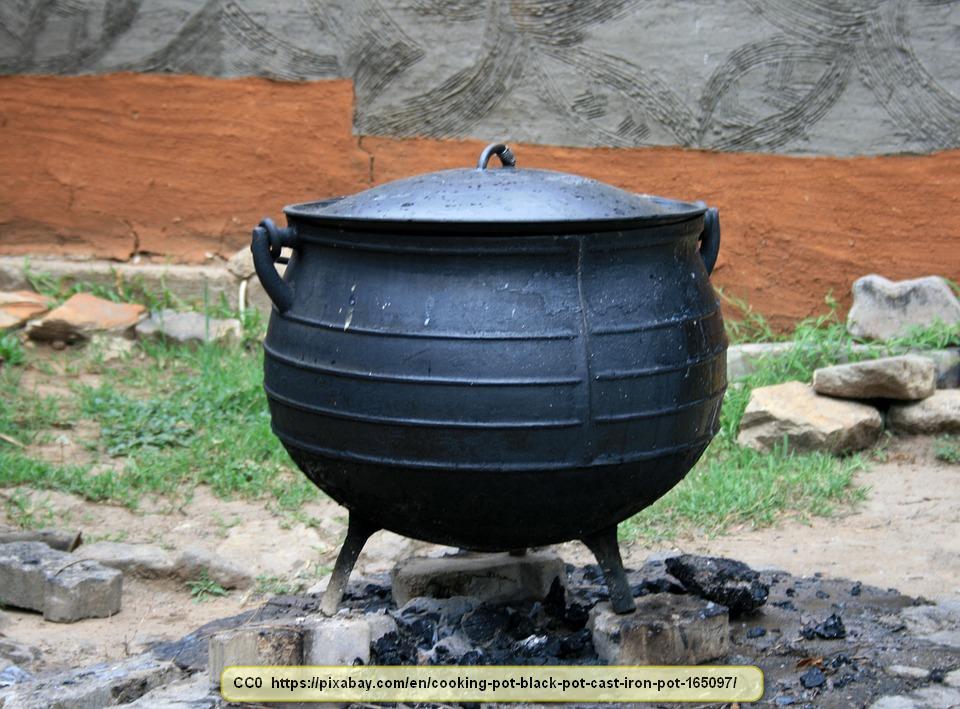 One of the biggest mistakes made with cast iron pans is to use soapy water to clean it. In the steps for seasoning the pan, the instructions given include washing the pan with hot, soapy water, but this is an exception that is permissible only because you are getting ready to season the pan. Soap removes the oils from a seasoned pan, making it necessary to season it again. Also, never wash a cast iron pan in a dishwasher, for the same reason.

To clean a cast iron pan, use hot water and clean it as soon after use as possible, after the pan has cooled down. If scouring is needed, use some salt, which acts as a scouring agent. After washing and thoroughly rinsing the pan, dry it immediately and apply a thin layer of oil to the pan to replace any that was lost.

Additionally, never put a hot pan in water, especially cold water. Doing so removes the temper from the metal, making the metal brittle and weakening it so it can break. (Yes, cast iron can break.) This is true of any pan, by the way. Hot pans shouldn’t be put in water. With pans that aren’t cast iron, water can cause the metal to warp.

When to season a cast iron pan 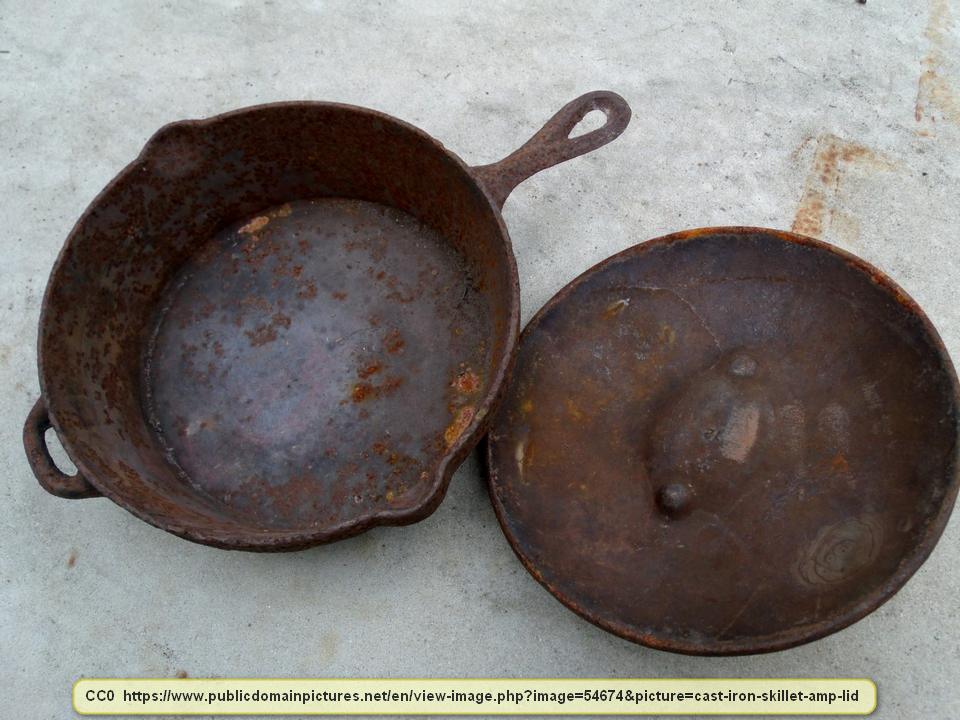 A seasoned cast iron pan will have a non-stick surface. If food starts sticking to the pan when it is cooked, it is a sign that the pan needs to be seasoned again. If rust forms in or on the pan, it definitely needs to be seasoned. The formation of rust is a natural process and it doesn’t automatically mean that the pan is no good. Seasoning the pan will most likely get rid of the issue and leave you with a perfectly usable pan.

I actually found a 10-inch cast iron skillet many years ago. It was filthy and almost completely covered with rust. I restored it by cleaning it and seasoning it. That pan is still usable and looks very much like a new one. I can easily imagine that many people would have thrown it away, thinking it was no longer any good. 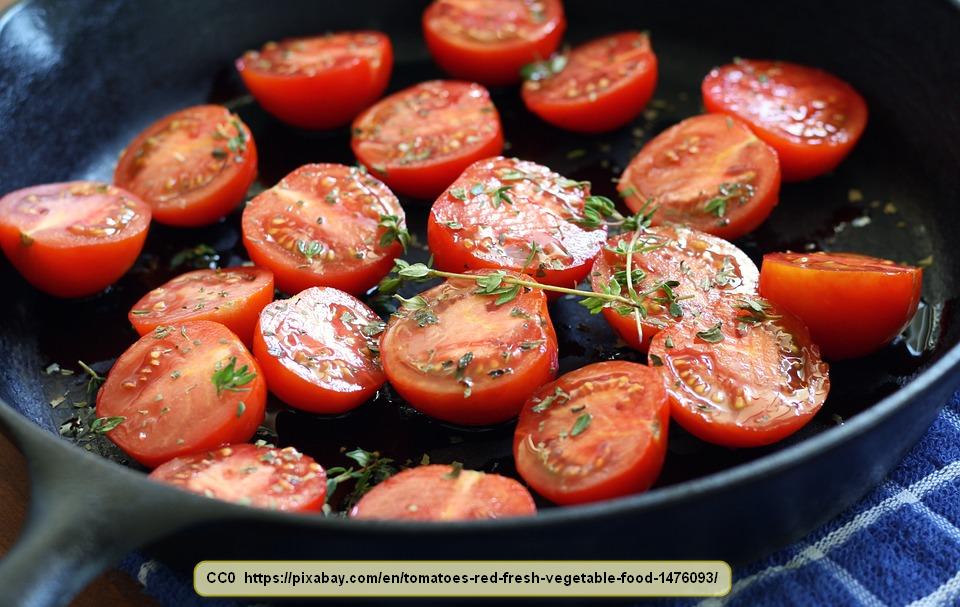 If you cook strongly acidic foods in a cast iron pan, you can reasonably expect that the pan will need to be seasoned. This includes foods that contain tomatoes, citrus juices, or vinegar. Acids will dissolve the oil seasoning that is on the pan. For the same reason, don’t leave acidic foods in cast iron any longer than you need to.

Enjoy your cast iron pots and pans. I know that I sure do. In fact, we just bought a new cast iron Dutch oven specifically for camping.