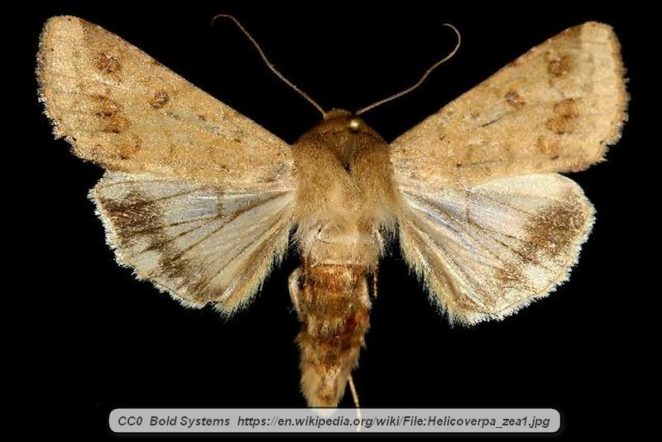 Granted, Helicoverpa zea is a scientific name and doesn’t sound especially ominous. For that matter, looking at a picture of this moth, a person could get the idea that it couldn’t cause much of a problem. In fact, the adults eat nectar. However, this is a major and serious pest in home gardens, agricultural fields, and wildlands. The damage isn’t done by the adults but by the larvae or caterpillars.

This inconspicuous moth goes by many names, often related to the crops it destroys. To be sure, the adult moth doesn’t do the damage, the caterpillars of this moth are the stage of the moth that does enormous damage. The amount of damage that is done yearly is in the hundreds of thousands of dollars.

Damaging to many crops

Helicoverpa zea is found throughout the US, including Hawaii and excluding Alaska. It is also found in the Carribean, in China, and in most of South America.

The problem with control

This is an insect that is quite resistant to pesticides. It has many natural predators, but studies have shown that the predators don’t make a significant impact, killing less than a percent of the total population of corn earworms. The insect is also resistant to bacteria, fungi, and diseases. The most common and successful control seems to be with the use of mineral oil.

There are a lot of other insect pests that are far better known, yet this moth probably causes more damage to agricultural crops in the US than any other. At least many hundreds of thousands of dollars worth of crops are lost to the larvae of this moth and very possibly the damage reaches into the millions.