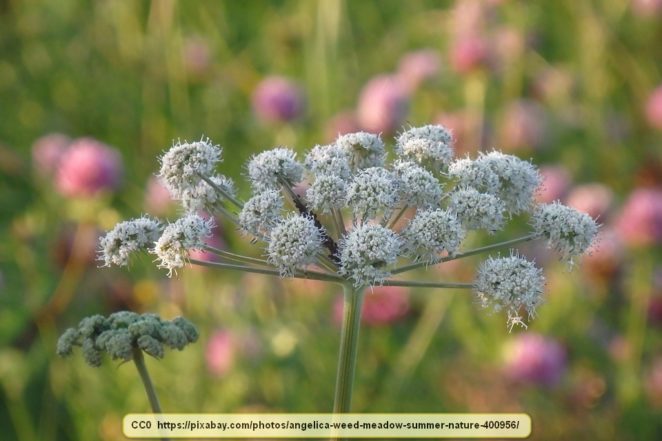 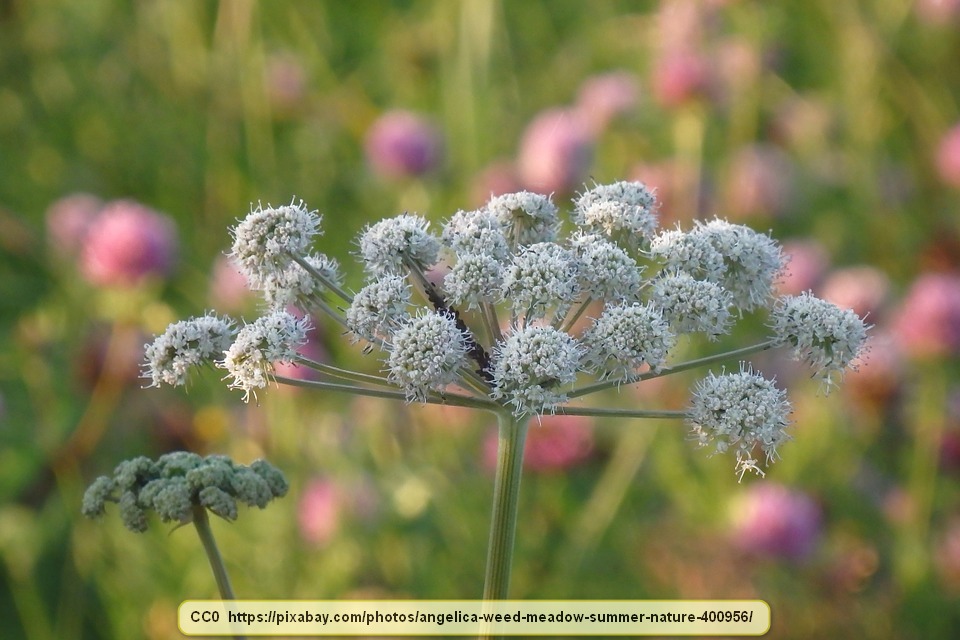 Garden Angelica (Archangelica officinalis), sometimes called wild celery, is a hardy biennial plant that has become naturalized through much of the northern hemisphere, particularly in places with colder climates. This plant has been used medicinally for centuries, though other similar species are seldom used for this purpose. Although this plant is called garden angelica, it is a wild medicinal herb. The scientific name literally means “official arch-angel”.

Angelica has an alternate name, too: Wild carrot. This is more appropriate than wild celery because the plant has a distinctly carrot-like smell and the roots are similar to those of carrots, though more slender.

The plant stalks occasionally grow to over 6 feet (2 meters) in height. The stalks are hollow, and the leaves are very similar to parsley or to carrot tops. Angelica is an aromatic herb, with a pleasant though somewhat heady aroma. The roots are long and tend to be fleshy. Yellowish to white flowers appear in late June through July, and appear as a broad flat umbel, not unlike carrots.

The roots, seeds, and leaves are the plant parts most often used medicinally, and for this purpose, the roots should be cleaned, chopped, then quickly air dried out of direct sunlight. Leaves and seeds can be dried the same way. The dried herb can then be kept in airtight containers. If these are kept in a cool dry place, the roots will maintain their medicinal potency for over two years, while the dried leaves and seeds lose their potency more quickly. Medicinally, the roots are more powerful than the leaves or seeds.

Angelica can be easily grown from the seeds, especially in damp rich soil with good drainage, and the plant is also marketed in many places for food. This is why it is sometimes called garden angelica.

Angelica tea is made by adding a tea ball containing 1 tablespoon of dried angelica to a cup of boiling water and allowing it to sit for 15 minutes. Honey can be added for a sweetener. The tea is useful for colic, gas, indigestion, and heartburn.

This herb is sometimes added to others because of its pleasant flavor and is sometimes used for respiratory problems, liver problems, nervous headaches, and poor circulation. The leaves can also be chewed for bad breath. Angelica stimulates the appetite; it can ease the symptoms of rheumatism, can loosen phlegm, and is good for easing coughs and sore throats. This last makes it valuable for treating cold symptoms.

Sprigs hung up in rooms lend a pleasant aroma to the room as they dry.

WARNINGS: When collecting angelica, make sure that you identify the correct plant, positively. There are many plants that look similar, and some, like water hemlock, are toxic. Angelica should NOT be taken by diabetics, pregnant women, or women who are breastfeeding. People who are taking anticoagulants should not take Angelica. Also, as with anything that is consumed, some people can have a sensitivity or allergic reaction to Angelica.

For the herbalist, angelica is one of the more useful medicinal herbs, and it often grows in such profusion that it is easy to collect a lot in a short period of time.