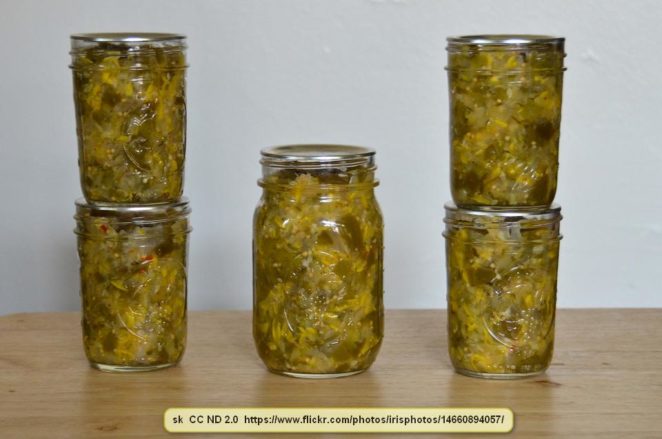 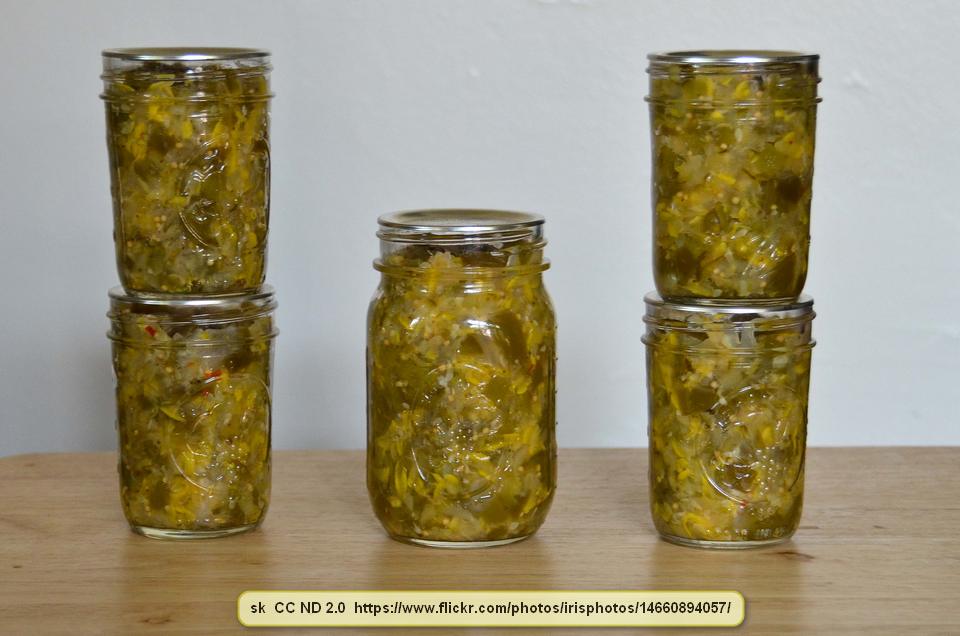 My mother was a terrific cook and one of the dishes she made and canned was homemade zucchini sweet relish. Unfortunately, when she passed away, her recipe died with her. However, I watched her make the relish enough times that the following recipe is a close approximation to her fantastic relish.

Mom made her relish using an old-fashioned hand-cranked meat grinder. I’ve made it that way, but usually use a food processor with a shredding blade. It is a lot simpler to make that way.

Like she did, I leave the peels on the zucchini since so many nutrients are in the skin. The zucchinis that I grow are normally allowed to get quite large, which means that they have seeds in them. For this reason, I core the zucchini after chopping off the ends. If you use immature zukes, coring isn’t necessary. The zucchinis just need to be washed to remove any dirt or residue, then they need to be shredded.

10 cups shredded zucchini (about the amount in one large zucchini)

1. Mix the shredded zucchini and shredded onion and put this in a large plastic or glass bowl. Don’t use a metal container because the salt can react with the metal.

2. Sprinkle the salt over the top of the zucchini mixture and mix it in by hand. Refrigerate this at least overnight to allow the zucchini to age.

3. Put the zucchini mixture in a strainer and thoroughly rinse it to remove the excess salt. Set aside.

4. In a large pot, combine the shredded bell peppers, vinegar, sugar, cornstarch, turmeric, nutmeg, celery seed, and cloves. Stir the mixture well, add the zucchini mixture, then bring it to a boil over medium heat, stirring frequently to prevent the sugar from burning. Reduce the heat to a simmer and let it simmer for 20-30 minutes, stirring occasionally.

5. Ladle this into sanitized canning jars, leaving a quarter-inch leeway at the top to allow the relish to breathe. This will make enough to fill 6-8 pint jars or 12-16 half-pint jars.

6. Wipe the jar rims, put on the lids and secure with rings. Place the jars in a boiling water bath, enough to cover the jars with at least an inch of water, and allow them to process for about a half hour or so.

7. Remove the jars from the water and allow them to cool and seal. Once they are sealed, remove the rings from the jars or they may be difficult to open later.

Start to finish that is very much like my mom made her fantastic homemade sweet relish. If you want it to be zesty, you can also add shredded chili peppers and cook them along with the rest.

This relish is suitable for any dish you’d use cucumber relish in. I even use it in my hotdog delicious and in hotdog casserole, both of which are main dishes. It is great on hamburgers and hotdogs, too. In fact, it is wonderful when combined with mayonnaise and ketchup to make thousand island dressing.

I like giving these as gifts and do eat quite a bit of it, too. For this reason, I try to can about 30 pints each year.

It may sound like a lot of effort to make, but it really isn’t. The homemade zucchini sweet relish is also so good that it is very worth the time and what little effort there is.