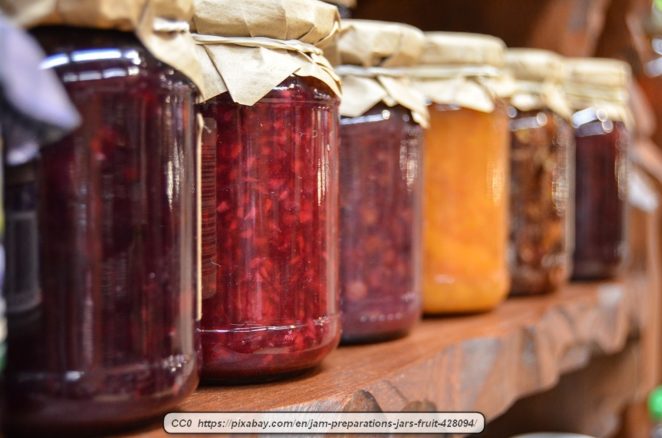 It needs to be noted that Brits often use the term ‘jelly’ as a slang term meaning “gelatin”. In America, a slightly different slang term is used for the same thing and it was derived from a brand name: Jello. This is not what we are talking about here.

Jelly is a combination of fruit juice, sugars, and pectin. This is heated and cooked, then allowed to cool. During the cooling process, it thickens and sets.

Jelly contains very little fruit pulp, if any at all, and no seeds. Common examples are grape jelly and apple jelly, both made from juice.

Jam also contains sugars and pectin, but the crucial difference between jam and jelly is that jam contains fruit pulp and often also has the fruit seeds.

To make jam, the fruit is usually cut into small pieces and cooked, normally in water, then mashed. Sugar and pectin are added and as with Jelly, this is allowed to thicken before being cooled and allowed to set.

Strawberry jam is a common example since it is easier to make than attempting to remove all the seeds to make jelly.

Again, preserves have fruit, sugars, and pectin. However, the fruit is usually cut into larger chunks. Because of this, the finished preserves have chunks of fruit in it. (Preserves are the same thing as conserves, so you might hear them being referred to by the other name.)

Most often, preserves are made from fruit that isn’t especially soft and which doesn’t immediately turn to a pulp when it is cooked, which is a necessary step in order for the pectin to cause the mixture to set.

Although preserves normally aren’t made with soft fruit, they can be. It is just more difficult. This means that it is possible to make strawberry preserves, though strawberries are soft fruits. This is true of apricots as well, and strawberry or apricot preserves are among the most common. Often, soft fruit preserves are made by simmering the whole fruit or fruit chunks in a syrupy sugar and pectin misture.

In parts of Asia, conserves are known as murabba. In Estonia, they are often called moos, and in Russia, they are varenye.

Although fruit butter isn’t included in the title, it is similar to jam, with some important differences. Fruit butter is usually made from fruit that has been pureed or forced through a sieve, then cooked with sugar until most of the water content has been cooked out. Pectin is normally not added or needed. Fruit butter generally has a thick consistency, rather than a jelled one, so it is sort of like a slightly runny pudding in consistency.

These are all different in how they are made and what they look like, though the flavor is quite similar. Knowing this, you can be better prepared when you purchase any of these since you will know what to expect. It is especially useful if you plan to make any of these.